With 2010 drawing to a close, we here at G.A.M.E.S. are going to throw our hats into the ring with our favorite games of the year. Our only requirements for a game to be on this list are that it must have been released this year and the writer must have finished the game. There is no consensus building on these lists, each writer is issuing their own opinions. We all have very different opinions on what we like; so, if you see a game on multiple lists, it’s probably something you should check out, too.

First up are my own personal favorites of the year. I managed to finish 18 games this year, and almost all of them were either sports games or RPGs; so, you know what to expect. If you’re not a fan of either genre, this post is probably not for you. 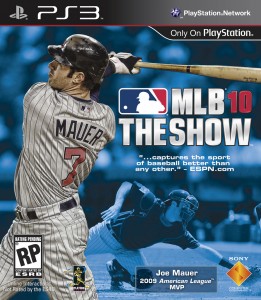 Sony did a fantastic job with this year’s edition of their baseball franchise. The graphics are definitely improved over last year, and they offer multiple control schemes to help suit gameplay to your liking. The only reason that MLB 2K10 sold as well as it did on PS3 was their million dollar challenge because when it comes to the actual game, there was no competition. While the game still has some room for minor improvements, it’s by far the best baseball game that I’ve had the chance to play. Yes, the franchise isn’t something that you need to buy every single year, but if you haven’t bought a baseball game in a while, this is the way to go if you have a PS3.

THQ hit it big with one of their smallest releases of the year. This Halloween-themed RPG (and its winter-themed expansion) captured the most basic essences of what an RPG should be. The lighthearted story and cel-shaded graphics fit the spirit of Halloween perfectly. Running around collecting candy and fighting against Grubbins in your Halloween costumes just hearkens back to being a kid again. You’d have to have a heart of ice to hate this game whose biggest flaw is that it only takes a few hours to beat.

This year, NIS America finally brought over the storied Sakura Wars franchise to North America. Yes, the game originally hit Japanese shelves in 2005. Yes, that means the graphics are a little dated. And, yes, I did pick a PlayStation 2 game as my top game of 2010. The point of playing games is to have fun and the combination of tactical battle system, campy storyline and the LIPS dialogue control system made this a very enjoyable experience for me. If it hadn’t taken so long to get the series over here, it might have been more favorably received by critics. But now that the next-gen consoles are so deeply entrenched, many people completely overlooked this one, and that is a big mistake for any JRPG fan.

Feel free to tell me what an idiot I am in the comments, or you can just tell us what your favorite games of 2010 are. Either way works. And keep an eye out for the game of the year articles from our other writers, too.