Throughout history, fictional and real, one weapon has been used more times to deal with everything from minor insults to the ensuring the future of an entire kingdom, and that is the blade. Almost anyone can wield one given tenacity and training, and versatile enough to express oneself through it. Whether you are a sneaky assassin who thrives on the silence of your blade or a proud duelist whose sword professes your ego and skill, it is an extension of who you are. With this in mind, we go through a few of the greatest blades to ever be drawn in video games and anime. 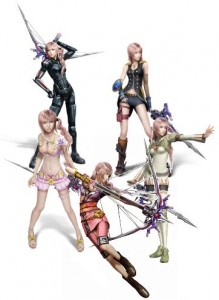 At the end of Final Fantasy XIII, Serah, Lightning’s younger sister, has finally awoken and everything is right with the world, that is until Lightning mysteriously disappears. Setting off to save her sister, Serah is joined by Noel Kreiss and the annoying sidekick, Mog, and they go off on a journey through space and time to save the world from destruction. Even though Mog takes the role of annoying sidekick to Navi-like proportions, he easily redeems himself when you realize that he is Serah’s weapon, a first for Final Fantasy.

Serah’s Starseeker has two forms: one each for short and long range attacking. In short range mode, her weapon becomes a sword, and for those pesky out of reach monsters, the Starseeker transforms into a high-tech bow for long range sniping. Most Final Fantasy weapons are only good for certain situations or enemies, but Serah’s bow-sword has unmatched versatility, and the transition from bow to blade and vice versa is seamless and almost instantaneous. This makes it easier for Serah to control the battlefield gracefully allowing Noel to come in for the kill. The idea of annoying sidekicks reminds me of an InuYasha moment where Shippo transformed into a bow to help Kagome shoot her day-saving arrow…

Speaking of InuYasha, when the great Dog demon died he left his two swords to his only two sons. Sesshomaru, the older son, was given the Tenseiga, a sword with the ability to heal a thousand people with a single swing, while InuYasha, the younger half-brother, was given the Tetsusaiga, a sword with the ability to slay a thousand demons with a single swing. 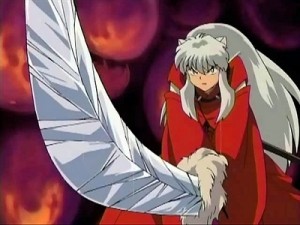 The Tetsusaiga or “Iron-Crushing Fang” is a powerful sword that has gained many abilities throughout the InuYasha series due, in part, to its absorption ability. By absorbing the essence from specific enemies, the Tetsusaiga has gained the power to break barriers and even unleash a wave of diamond shrapnel. These abilities aside, InuYasha has been able to tap into the sword’s true powers and has been able to unleash such destructive attacks as the Backlash Wave, which uses a demons power against them and sends their energy after them in the form of a cyclone. Any of the Tetsusaiga’s attacks can become even more deadly when combined with one of Kagome’s arrows. 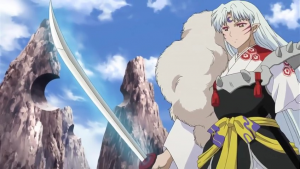 The Tenseiga or “Heavenly Rebirth Fang” is the antithesis to the Tetsusaiga. Unable to harm any living being, the Tenseiga’s primary purpose is to heal and resurrect the recently deceased. While resenting the fact that he can never wield the Tetsusaiga, Sesshomaru still carries the Tenseiga as well as his own sword which he uses in battle. The Tenseiga also has the power to rip open portals to the underworld, which Sesshomaru used to find Rin’s soul and return it to her. 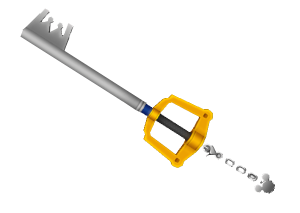 Combining the lightheartedness of Disney with the convoluted storylines of the Final Fantasy franchise, we were given one of the greatest video game collaborations, Kingdom Hearts. Starring many classic characters from recent Disney films all the way back to the iconic Mickey Mouse, as well as many famous characters from Square Enix games, Kingdom Hearts was one of those ideas that seemed crazy at first but worked quite well. Of course, they needed a hero to lead the franchise and we were given the childish-yet-heroic Sora, who only had a simple dream of exploring different worlds with his friends Riku and Kairi. But, on the eve of their expedition, their world is attacked and consumed, and Sora takes up the Keyblade in order to save his friends.

At first glance, the Keyblade seems like the most impractical weapon this side of the gunblade. Swords are versatile weapons because they can slash, stab and cut fairly easily. The Keyblade itself looks nothing more that a blunt instrument that is decked out to look like, well… a key. Despite what may be a detriment to the weapon, Sora uses it with extreme precision and grace and has taken on vast armies of Heartless and Nobodies, Disney Villains and even beaten the demi-god Hercules, which is an impressive feat all its own. One thing that makes the Keyblade so great is the fact that you can easily change its form by switching out the little key chains that hang from the hilt. In later games, the Keyblade takes on new dimensions as we see Sora is able to dual-wield Keyblades and at times he doesn’t even need to hold them as they zoom around him as if he were Jedi. As the series progresses, more and more people who are able to wield the Keyblade, including, surprisingly enough, Kairi, which gives us more characters to follow as they try to understand the nature of the human heart and battle the forces of Disney and Square Enix. 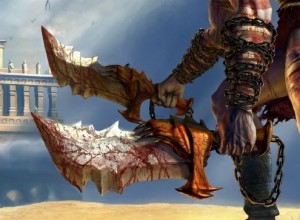 In a story that could be told by the great Greek philosophers, Kratos has been screwed over by the gods more times than he can count. Originally a human warlord, Kratos pleaded to Ares, God of War, to help prevent a devastating loss at the hands of the Barbarian King and was thus bound to serve Ares. In return, he was given the Blades of Chaos, though the chains connecting them were permanently seared into his skin to signify his servitude to the Gods of Olympus. As the series progresses, Kratos’ weapons change to the Blades of Athena and later Exile, but they still remain the ungodly weapons they were throughout.

The Blades of Chaos were the perfect weapon for Kratos. Used correctly, the blades left no one standing, carving through armies, demons, legendary monsters, the Titans and the Gods of Olympus. Thanks to the chains that bound them to him, Kratos could use them to find new and creative ways to kill anything–from killing rows of enemies from spinning the blades like a helicopter to impaling a single enemy and using them as a yoyo. These blades were made for the most sadistic of people, a perfect fit for Kratos. 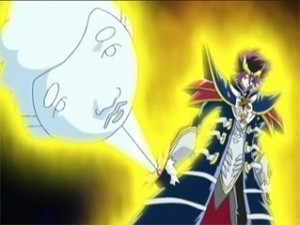 To the untrained eye, Bobobo could be seen as a stupid anime with too much randomness to actually make any remote sense, but those who have delved deep are rewarded with the realization that the show thrives on smart humor which is played off as random. Bobobo is the yellow-afro-sporting hero whose sole duty is to protect the world from the hair hunters, a group dedicated to making the entire world bald. Accompanied by a group of equally unusual characters, Bobobo takes on all challengers, and through the power of history, pop culture and non-sequitors, he fights for hair justice.

Despite his many abilities, one of the more impressive ones Bobobo uses is the Bobobo Fusion technique. By eating one of his friends, generally Don Patch or Temnosuke (Jelly Jiggler in English Dub) he can transform into a more powerful character with even more unique abilites, like when he transforms into a pop idol whose power only works if the other characters continuously sing. But this article is about swords, and there is one fusion where he swallowed Temnosuke and Don Patch together. The unwanted result created Bobopatchnosuke, who carries around the Happy Man Merciless Sword. What’s so special about this sword? Well nothing except that it has a human head attached to its end. A creepy human head that just stares at you and when Bobopatchnosuke uses his Brand of the Happy Man, you will be smacked with the sword which leaves an imprint of that creepy face on your body like a tattoo.

Blades don’t have to be destructive to be great or legendary, they just have to be wielded by the right people and used in the right ways. What are your favorite bladed weapons in video games and anime? Let us know below or we shall duel to the death!