With the recent release of Rayman Legends on current-gen consoles, there is no better time than now to explore the history of the limbless wonder, from conception until highly-recognised gaming icon. So, without further ado, here is the history of Rayman…

Not many gamers know that the limbless wonder was, in fact, originally supposed to have limbs. When the game designers realised that limbs would be impossible due to technical limitations at the time, they removed the limbs and, thus, created the idiosyncratic character we know and love today. 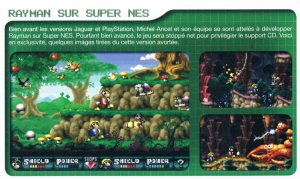 Rayman was originally intended to make his debut on the Super Nintendo in a co-operative game that had players control a differently-coloured Rayman and work together to complete the game’s stages. However, due to the advent of optical disc-based technology, this prototype was scrapped, but many of its core elements would be reworked to create… 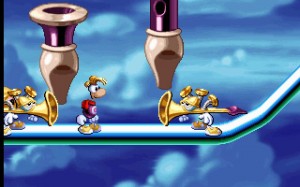 The true debut of the fist-throwing, helicopter-twirling series was released on the Sony PlayStation and PC as well as the short-lived Sega Saturn and Atari Jaguar. Whilst co-operative gameplay was ditched, the Rayman character was still present and brought to life with beautifully-animated cartoon visuals in a diverse, zany world. This game introduced elements that would become staples of the series: Rayman’s helicopter power and his trademark fist, as well as breaking inhabitants out of cages. This was a favourite among PlayStation players, even going on to become the UK’s best-selling PS1 game, but was notorious for its harsh difficulty level, as the game hadn’t been play-tested prior to release. Still, it paved the way for future releases in the series and even spawned a series of educational games called Rayman Junior (Rayman Brain Games in the US). 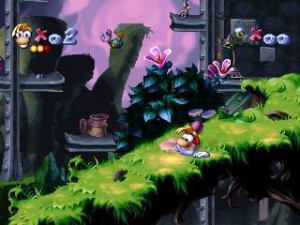 After the commercial success of Rayman’s first adventure, the team at Ubisoft decided to start work on a sequel that artistically resembled its predecessor. New features were lined up for inclusion, featuring Rayman’s ability to travel from the foreground to the background using strange new devices. They also designed new foes in the form of space robots plotting to take over the limbless hero’s world. Nonetheless, this was at a time where 3D graphics were taking over the gaming world, and Ubisoft left the project in favour of a fully three-dimensional Rayman game. 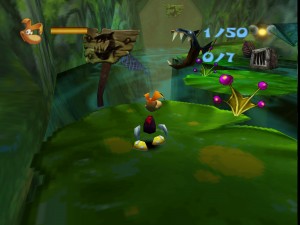 Just like Mario and Sonic before him, Rayman had to make the transition from 2D to 3D and, fortunately, it proved to be a successful one. There is a reason that Rayman 2 is among several writers’ ‘Greatest Games of All Time’ lists, and that is because of its varied and challenging gameplay in a unique fantasy world. Although still maintaining the humour and charm of the original game, the sequel is somewhat darker in tone, as Rayman quests to save the Glade of Dreams and its inhabitants from the clutches of the pirates who’ve enslaved them. There are several great things about this game: Firstly, the aforementioned, varied gameplay – one minute, you’ll be running across the landscape, fighting off pirates with your fist, next, you’ll be riding a sprinting rocket through a forest, and the next you’ll be commandeering a flying ship, shooting enemy forts and saving innocent creatures. Secondly, the game’s world is highly-detailed and unique in design and is home to a cast of lovable characters as well as being more consistent in atmosphere than the original. Ubisoft apparently thinks so much of the game that it has been released on a multitude of gaming platforms, including a port to the Nintendo 3DS under the Rayman 3DS moniker. Furthermore, a multiplayer spin-off was created in the form of Rayman M (or Arena in the US), which featured characters from the second game and various challenges among a variety levels.

This is the first Rayman game not to be directed by Rayman creator Michel Ancel, but it still carries on the series’ legacy in good form. Ditching the previous game’s darker scenario, it assumes a relatively light-hearted and zany atmosphere comparable to that of the original game. This results in a stronger variety of worlds than Rayman 2, as green forests, magical councils and other colourful lands abound. This game also introduces Rayman’s current character design, with his trademark red bandana traded in for a hoodie, and also offering him a range of new powers that allow him to break down barricaded doors, throw chains that let him swing on magic rings, and generate whirlwinds that destroy platforms so they are low enough to jump on. It was a good, solid game, if arguably easier than its predecessor. 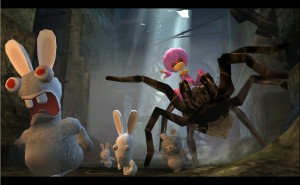 A fourth Rayman platformer was in the works but was eventually scrapped. Eventually, another Rayman game did come out, albeit with a stranger concept. Rayman: Raving Rabbids consisted of seventy-five mini-games that take inspiration from many gameplay genres including on-the-rails shoot ‘em ups, racing games and sports titles. In some ways, it was very much Rayman’s version of Mario Party and was successful enough to produce a sub-series within itself, with the Rabbid critters taking up Ubisoft’s attention for years before the next true Rayman platformer came to fruition. 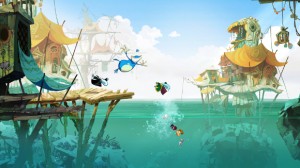 This next-gen update of the Rayman franchise took the series back to its two-dimensional roots, reminiscent in many ways to the first game. Again, humour took centre-stage, and the plot sent Rayman and Globox on a quest to stop the undead beings of the Land of the Livid Dead from invading their world after accidentally waking them with their snoring. (No, seriously!) What made this installment so fun and enjoyable was that its cooperative gameplay, which proved to be accessible to both casual and hardcore gamers. This meant that Origins was essentially fun for the whole family, allowing up to four players to play through splendidly colourful stages that ooze variety and charm. For long-time fans of the limbless wonder, it also meant the reintroduction of characters absent from the series for years including Betilla the Fairy and the Magician.

The Rayman series has been around for eighteen years and has proven itself a worthy platforming series that rides the waves alongside the likes of Sonic and Mario. The fact that the series is constantly evolving has kept it fresh and invigorating for players, something that has ensured its survival for well over a decade. Although in the current generation, Ubisoft has taken the limbless wonder back to his 2D roots with Origins and  Legends, who knows what lies ahead in Rayman’s future and if he’ll survive the next-gen era that is soon to come.