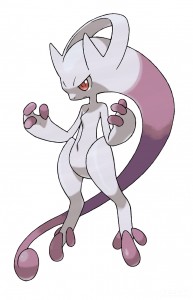 Nintendo has revealed a new Pokémon in the latest trailer for Pokémon X & Y. As you’ll see in the trailer below, the new psychic type Pokémon bears a great resemblance to the legendary Pokémon Mewtwo from the first generation Pokémon games.  While Nintendo has confirmed this new Pokémon has some sort of connection to Mewtwo, they haven’t revealed any other details.

Most likely this is some sort of evolution of Mewtwo.  Maybe Mewthree?  Anyone?

Anyway, this new Pokémon is set to feature in the upcoming Pokemon movie Extreme Speed Genesect: Mewtwo’s Awakening.  The movie is going to release this July in Japan, and hopefully more questions will be answered.

Pokémon X & Y are coming out later this October for the Nintendo 3DS.