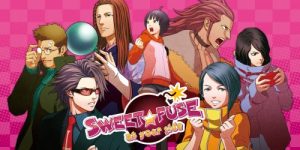 Western otome fans don’t get a lot of love when it comes to having some of their most anticipated Japanese games localized, but Aksys Games seems to be trying to fill that niche. The publisher that brought over Hakuoki: Demon of the Fleeting Blossom last year has announced plans to release another otome title, Sweet Fuse: At Your Side (originally Bakudan★Handan in Japanese), for the PSP sometime this summer.

Sweet Fuse: At Your Side is a visual novel that follows Saki Inafune as she attends the grand opening of her uncle’s new amusement park based on video games. (Before you can ask, the answer is yes: Saki’s uncle is indeed famous game developer Keiji Inafune.) When the evil Count Hogstein puts an end to the festivities by threatening to blow up the entire park, Saki and several eligible, romance-able bachelors become players in the Count’s deadly game as they try to escape destruction.

With 14 possible endings, Aksys says this one could keep you busy for more than 30 hours. It looks like Sweet Fuse also involves solving puzzles to save yourself and your companions. At this point, I can’t be the only one thinking that Aksys is trying to bring in players from both the Hakuoki and 999 camps with this, right?

We don’t know much else about this release yet, but you can see the original announcement from Aksys along with some screenshots here. Stay tuned to The G.A.M.E.S. Blog for updates as Aksys reveals more information!