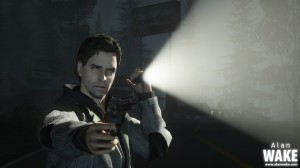 Alan Wake is a very anticipated supernatural thriller game that takes place in fictional town of Brightfalls. The game is modeled after shows like the X-Files and Lost. Microsoft announced today that all new copies of the game will have a token code card to download the title’s first Game Add-on at no cost when it becomes available later this year.

Alan Wake, a bestselling writer, hasn’t managed to write anything in over two years. His wife, Alice, brings him to the idyllic small town of Bright Falls to recover his creative flow. When she vanishes without a trace, Wake finds himself trapped in a nightmare. Word by word, his latest work – a thriller he cannot even remember writing – is coming true before his eyes. At night a powerful dark entity takes overs the town and its inhabitants, Wake’s only protection seems to be light. At day things return to normal the townspeople no longer possessed

Alan Wake features a day/night time cycle. During the day your safe. This is your chance to stock up on supplies and to interact with the NPC’s. Light plays a significant role in the game play and strategy. The enemies, called “the Taken”, are sensitive to light. The primary weapon at Alan’s disposal is an ordinary flashlight. Secondarily one can use guns for distance attacks and street lights for cover. Trap building that triggers light sources are also present in the game. And weirdly enough destroyed enemies turn into batteries for your flashlight. I don’t know if that’s better or worse than randomly finding batteries lying around the town, or in the middle of a cave? It stills has some great potential, and finally we have something to look forward to that is not a sequel to or a clone of an already established game line.

In the build up to release the developer has created a six part Live-Action prequel story that is free to view on their home site. I kinda like this trend as this tends to force the developers to work on the storyline of their games.

And if that’s not enough they have opened an Alan Wake store filled with branded and overpriced items. Let’s face it, $45 for flashlight is ridiculous.

Alan Wake releases May 18th only on Xbox360. Gotta feeling this will be my pick of the month for May.