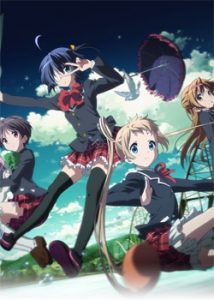 The online branch of The Anime Network will be getting 7 new shows in the coming months. Four of the shows will be free for everyone while three will require a premium membership. The four free shows are From The New World, Girls und Panzer, Medaka Box Abnormal, and BTOOOM!, while the three premium titles are Hidamari Sketch x Honeycomb, Busou Shinki, and Chunibyo Demo Koi ga Shitai. Each premium series offers the first episode for free, and a premium membership will run you $6.95 per month or $69.95 per year. All of the shows are set to run for 12 episodes and are still listed as coming soon without an exact launch date on the site.

From the New World

Based on Yuusuke Kishi’s award winning novel, the story of From the New World follows five teenagers who learn that their utopia isn’t all it seems. The series is set 1000 years in the future, in a world where technology has been replaced by a magical ability to create anything. When Saki finds a lost artifact, they learn that their seemingly fantastic town has more to its past than they realize, and the five adolescents might be in more danger than they bargained for.

This series follows a group of girls at Oarai High School who practice “Sensha-do” the art of operating tanks. The story follows the girls as they get revved up for the national Sensha-do championship, taking any promising student they can get their hands on, even the ones who hate tanks. The series is directed by Tsutomu Mizushima (Another, Blood-C) and the written by Reiko Yoshida.

Based on light novels written by Nisio Isin, season two of Medaka Box picks up where the first left off. Medaka’s suggestion box is still up and running and the council is out to help whoever they can. However, when Medaka is exposed as something superhuman, and she’s not alone. She will need to call on everything in the Student Council’s arsenal to save the day.

Ryota Sakamoto is a gamer who suddenly wakes up on an island with a little food, some bombs, and a crystal in his hand. All he knows is that one minute, he was playing “BTOOOM!” a popular new video game, and the next he’s stuck in a real, live recreation of it. The island is covered in others just like him, out to kill seven people in order to escape the island. Only time will tell if Ryota’s well-honed gaming skills translate over to real life.

Hidamari Sketch x Honeycomb is the fourth TV series based on Ume Aoki’s hit manga series. The show follows the ambitious art student Yuno and her friends who live at the Hidamari Apartments across from Yamabuki Art School. Many of her “big sisters” are graduating soon, and Yuno must take the lead and help a new set of students. Yuno’s art assignments are also getting a bit more challenging, and soon she’ll have to make some decisions about her own future.

Rihito lives with four high-maintenance women who are eager to please and willing to fight for his attention. While this may sound great in theory, unfortunately for him, high maintenance means making sure their batteries full as the four girls are 6 inch-tall androids. Busou Shinki follows the four miniature girls on various adventures while each tries to become Rihito’s favorite. The show is based on a series of action figures that have been released by Konami since 2006.

Chuunibyou, directed by Tatsuya Ishihara (Air, Clannad), follows Rikka and Yutta. The delusional Rikka is convinced the two of them are dating, but it’s kind of news to Yutta. Yutta was once delusional himself, believing that he had superpowers, but he thought he was past that. Now, Yutta’s old friend Satone has reappeared, and she’s as crazy as ever. Two crazy girls and one poor guy stuck in the middle. Yutta’s sanity might hold out, but it might be a long struggle either way.

Whew…that’s a bit of a list, but rumor has it there’s more coming down the pike so check back for other fall announcements from The Anime Network.