This week, the world of anime news features annoucements about old series getting new looks, plus live action adaptations, too. Read on to find out more.

The Japanese city of Takahashi is raising money so they can fund a brand new Tenchi Muyo series, branded AI: Tenchi Muyo. The city is hoping that the anime will increase local tourism and allow them to sell merchandise at series-related events. “Anime pilgrimages” have become more frequent in the past decade, as fans flock to the real life versions of anime settings such as Dougo Hot Springs (Spirited Away) or the city of Chichibu (Anohana).

The newest Sailor Moon series, Sailor Moon Crystal is set to be released globally on July 5; however before the world can enjoy Usagi’s (Serena’s) newest adventures, a select few will get to see an advanced screening. The event will take place on June 30 during a special event called “Pretty Guardian Sailor Moon Usagi Tsukino in Special ViVi Night” in Tokyo. This is celebration of not only Sailor Moon Crystal, but to celebrate Usagi’s birthday, which happens to be June 30. This event is being run by ViVi which is a fashion magazine for women and girls.

The simulcasts of Sailor Moon Crystal will be available on Crunchyroll, Hulu and Neon Alley.

It is the first Dragon Ball Z movie in 17 years, and it’s being shown in theatres from August 5-9. Following the events of the Majin Buu saga, a new power known as Beerus, an ancient god of destruction, searches for Goku after hearing a rumor about a Saiyan warrior who defeated Frieza. Goku, along with the other Z-Fighters must stop Beerus from destroying the Earth, and possibly the entire universe.

Dragon Ball Z will see a limited North American release across 350 theaters in the U.S. and Canada, and tickets can be purchased from the movie’s website in the coming weeks. 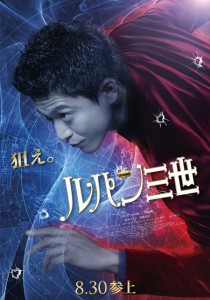 The new poster for the soon-to-be-released Lupin III live-action movie has been revealed, which shows lead actor Shun Oguri as the titular character Lupin.

Due to be released August 30 in Japan, the newest iteration of the franchise shows Lupin and his pals before they became a gang. They must break into a fortress-like safe to claim the Crimson Heart of Cleopatra. It is said that anyone who possesses the treasure will have the power to “unite the world.”

Although this is not the first Lupin III live action adaptation, it is the first one in nearly forty years.