Welcome to this week’s Anime News Recap. First off the summer anime season has begun, and the first episode of Sword Art Online II has been released for simulcast on CrunchyRoll or Hulu. Speaking of new series, there’s news on Sailor Moon Crystal and a new special from Detective Conan plus some manga-related news. Check it all out below!

Granzella is a studio most known for making some wacky clothes on the pseudo-social network, Playstation Home, but starting this year, they plan to start releasing different types of software. They announced that for the Playstation Vita, they are releasing “a game where anyone can easily have fun while creating manga.” With very little information having been released, we can only hope that this program will allow some of us more artistically challenged people to easily create our own characters and stories. 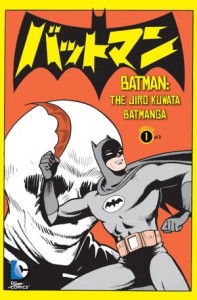 Batman Manga Gets an English Release

Back in the 1960s manga artist Jiro Kuwata, adapted Batman into a manga which ran in the Weekly Shonen King and Shonen Gaho magazines from 1966 to 1967. It has now been announced that DC Comics will be releasing the Batman manga in English in both print and digitally. DC will release a chapter each week online , and will conclude it by releasing three volumes of the entire manga later this year. The manga follows the same story general story as the American Batman, as he goes around being the world’s greatest detective. To keep authenticity, the manga will read in its original right-to-left format. Although the specific release date is unknown, the digital “Batmanga” will be released on the DC Comics App, Comixology, iBooks, Google Play Store, Kindle Store and the Nook Store.

At Anime Expo, Viz Media revealed the English cast  for the new Sailor Moon Crystal. Viz did their own dub for the original series with many of the those voice actors returning in Crystal. The subbed version is now available VizAnime and Crunchyroll. On a personal note, I’m a little disappointed that they decided to keep the original Zoicite as a male instead of how in the original series dub, he became a girl.  Nonetheless, here’s the revealed list:

While some series are getting a reboot, some series are still continuing strong today with no end and sight, as is the case with Detective Conan (Case Closed). This year marks its 20th anniversary, and to celebrate, a new special called Detective Conan: The Disappearance of Conan Edogawa: The Worst Two Days in History is in the works. In the special, Conan loses his memories, but that’s only part of the mystery. Here is the first released preview. (English translations provided here)