Welcome to this week’s Anime News Recap. This week we have a few more previews for you, including a first look at some series that have announced second seasons.

On Saturday, two previews were streamed on the official website for the upcoming anime, which is based off of the visual novel of the same name:  Ushinawareta Mirai o Motomete. The story revolves around Uchihama Academy, which is building a new school building, while the last one is to be closed. Before they close the building, the school plans to hold one last school club festival inside it, with the students planning to go all out to make this a festival worth remembering. During preparations for the festival, main protagonist So Akiyama, who is on the executive committee, must investigate the old building for supernatural activity which is unnerving the student population. In the process of this, So meets a late transfer student Yui Furukwara, and that’s when the wheel’s of destiny begin to spin. The anime is scheduled to be released in early October.

Aldnoah Zero and Baby Steps are anime that began simulcasting earlier this year. Aldnoah Zero is about a future where part of the human race has found a rare power on Mars, known as Aldnoah. Using this power, they colonize Mars and call themselves the Vers. Years before the events of the series, the Vers decided to wage war on the Terrans (Earth), and the resulting war caused the Moon to explode. This event, referred to as “Heaven’s Fall,” caused pieces of the Moon to fall and devastate Earth. After a decade-long armistice, the princess of the Vers comes to Earth on a goodwill mission, but is seemingly killed in the process, which prompts the Mars Knights (warriors who float in giant castles and handle giant mechs) to land on Earth and wage another war. 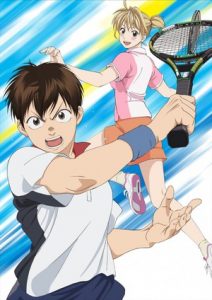 Baby Steps is a sports anime which stars punctual and academically-focused Eichiro, or Ei-chan as everyone calls him. He is famous for being a perfectionist who plans out his entire daily routine, down to his sleeping and eating habits. To try and include exercise into his daily schedule, Ei-chan takes a learners lesson at a tennis school and finds out that he has a talent for the sport. There, he also sees his classmate and potential love interest Natsu, who wishes to be a professional tennis player. Soon Ei-chan is playing tennis full time, which begins to open his world to a new way of living.

Both series have just recently finished their first seasons and have announced that they will receive second seasons in the coming months. Aldnoah Zero is planning for a January release, while Baby Steps is going for Spring 2015.

Based off the shojo manga of the same name, Wolf Girl and Black Prince stars Erika Shinohara, who is a vain 16-year old girl who likes to brag to her friends about her romantic conquests. There is one small problem: she doesn’t have a boyfriend to speak of. She claims that a boy in a candid photo is her boyfriend, and to make the lie truth, she enlists his help in the charade, but another problem arises. The boy, Kyoya Sata, looks like a sweet innocent person, but is in reality a sadist who begins to use Erika’s secret against her, treating her like his dog. The anime is slated to be released in October.

Based off Jun Sakura’s manga, Yugami-kun ni wa Tomodachi ga Inai, Yoji and Chihriro are desk neighbors in school, but Yoji is a very strange person. He is the star athlete in the baseball club, but he still hasn’t acclimated to the social status of the club. Despite being a loner and maybe a bit awkward, Yoji doesn’t seem to mind being alone. This anime is to be released October 4.

Madan no O to Vanadis

Vanadis are beautiful women who ride into battle with weapons that are forged from dragons. There are seven all together who rule seven different territories and are feared by their neighboring countries. One day, a boy tries to fight and vanquish one of the Vanadis, named Ellen. The boy, Tigre, is defeated in battle, but instead of killing the boy, the Vanadis instead imprisons him in her castle. The preview for the anime also includes a snippet of the opening song “Ginsen no Kaze” (Wind of the Silver Flash) by Konomi Suzuki. You can look forward to Madan no O to Vanadis when it is released October 4.