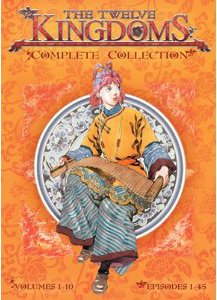 The Twelve Kingdoms is easy to miss out on if you’re not looking for it or something of its kind. It’s more like a typical fantasy novel than any other anime I’ve seen, which is exactly what I wanted when I discovered it back in 2009. I was seeking a more serious show that still had the fantastic elements in a lot of the other series I watched, so when I found it on Amazon, I decided to just take a chance. I bought the complete series without previewing any of the episodes online first. It was definitely one of the best spontaneous purchases I’ve ever made.

The Twelve Kingdoms (or “Record of 12 Countries” as it is sometimes called) is actually adapted from a light novel series by Fuyumi Ono. Both the anime and the novels contain several stories following many characters in the high fantasy world of the Twelve Kingdoms.

The first story follows Yoko Nakajima, an honor student who just wants to fit in. She has been having recurring nightmares, and those bad dreams become a reality when a demonic bird attacks her high school. A mysterious man named Keiki appears and offers Yoko his loyalty and protection, but only if she accepts his oath. Unsure of what else to do, Yoko accepts. Keiki gives her a magic sword and whisks her off to his world. Yoko experiences a lot of changes as she adjusts to life in the Twelve Kingdoms, but she ultimately finds her place. In the anime, two of Yoko’s friends get caught up in Yoko’s adventure: Yuka Sugimoto, who is obsessed with fantasy novels, and Ikuya Asano, a childhood friend. Sugimoto was originally in the light novels, though she never left Japan with Yoko; Asano was created for the anime.

After Yoko’s first story ends, the anime keeps her around mostly as an audience surrogate. She listens to other characters relate the rest of the tales presented in the series. Her story arc is the longest one in the show, so I won’t go into too much detail about the rest. The other arcs follow various rulers of the Twelve Kingdoms and their Kirin. Rulers’ lives are bound to their Kirin: as long as the ruler remains just and good, he or she lives forever, and so does the Kirin. However, should the ruler fall from grace, the Kirin will become ill and die, taking the ruler with them. One story tells of a Kirin who was born to choose the ruler for his country, but was afraid to make the wrong choice. Another follows a king and his Kirin, who were both born in our world, as they find each other and develop a close friendship. The final story arc of the anime has three perspective characters. Two are girls who, for their own reasons, journey from far away to find Yoko. The third is Yoko herself, who at this point is attempting to stop a rebellion.

I loved all of the stories told in The Twelve Kingdoms. There is a lot of wonderful character development in this series, especially from Yoko. She grows up so much over time that I was actually proud to see her maturity level in the last story arc. Sadly, the anime stops after the fourth light novel, and there are four more in the series. The books were being brought over to North America by Tokyopop, but since they’ve stopped publishing, I’m not sure when or if we’ll ever see the rest of Fuyumi Ono’s incredible fantasy universe in English.

As much as I enjoyed The Twelve Kingdoms, I won’t tell you it is the best anime on the planet. To be honest, it’s probably a good thing I didn’t try to watch the series online ahead of time, or I might not have bought it. Unfortunately, the episodes play out like chapters from the books. Fantasy novels have this tendency to end chapters with little closure. It”s usually not a big deal because you can just turn the page and read what happens next. That doesn’t always work so well with anime, though. To top it off, it takes about five or so episodes for you to see any explanation for what’s going on. The action starts pretty quickly, which is nice, but you have no idea why anything is happening. The only other annoying thing is that Yoko starts off as a cowardly crybaby. She really isn’t very endearing at first. In fact, I nearly stopped watching just because I was tired of watching her cry. However, once you get past the confusion and whining of the first several episodes, Yoko grows a lot as both she and the audience discover her purpose in the magical world in which she finds herself. The relationship between one particular king and his Kirin is also a real treat to see unfold in one of the later storylines.

Despite its shortcomings, The Twelve Kingdoms definitely deserves your attention. You’ll love it if you enjoy fantasy novels, but I think any anime fan could find things to like about the series. It’s a great show with a strong female lead, excellent character development, and a rich, magical world that exists alongside our own. The Twelve Kingdoms is more serious than many shows out there, but that’s part of what makes it special, too. This anime has a permanent place in my top five, and I’d recommend it to anyone looking for something a little different from most mainstream series.