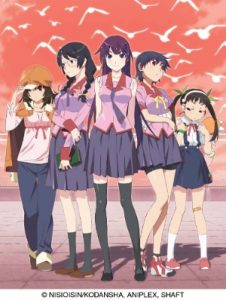 Aniplex has announced that they will be bringing a limited edition box set of the critically-acclaimed Bakemonogatari to the United States and Canada this November. The series follows Koyomi Araragi who seems to have a knack for meeting girls with supernatural problems — one girl cannot find her way home, another seems to be completely weightless, etc. — and Koyomi takes it upon himself to help them each of them. The series is based on a pair of light novels written by Nisoisin, perhaps best known in the U.S. for the novel Anotherholic, a xxxHOLiC collaboration with CLAMP.

The limited edition box set contains the 12 episode TV series, which ran on Japanese television in 2009, plus the 3 episode OVA.  The discs will feature Japanese audio only with English subtitles, but they contain bonus audio commentary by some of the voice actors, textless openings and endings and other special features.  Additionally, the box set will also include a 36-page booklet containing production designs and illustrations.

The Bakemonogatari Blu-ray set will be available online via RightStuf on November 20th for the tidy sum of $149.98, but you can watch it on Crunchyroll and Hulu starting September 14th with one episode being added every week.