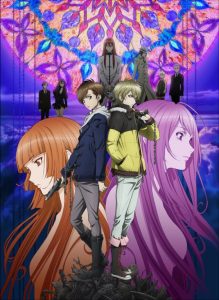 At A-Kon this past weekend, Aniplex of America announced the release dates for seasons one and two of Blast of Tempest, a series adapted from a manga written by Kyou Shirodaira and illustrated by Arihide Sano and Ren Saizaki. The story follows Mahiro Fuwa and Yoshino Takigawa, who are contacted by Hakaze Kusaribe, the estranged leader of the Kusaribe clan. Hakaze needs Mahiro’s help to escape the deserted island on which she has been trapped. In return, Hakaze would help Mahiro find out the truth behind his sister’s murder. Both releases will be Japanese audio only with English subtitles.

Season one will release on August 13th while season two will hit shelves January 21st, 2014, with both sets priced at $74.99. Each season will have 3 DVDs with 12 episodes apiece; the first set will also contain a reversible mini-poster, a sixteen page booklet and reversible covers. It’s likely that the second set will also have similar bonuses; however, they have not been formally announced. We’ll be sure to let you know when they are, so check back again.