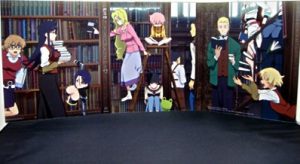 Aniplex USA has announced release dates for two anime series, the DVD release of  Durarara!! and the Blu-Ray release of Read or Die. Aniplex has partnered with Bandai Entertainment for the distribution of both titles.

The series description from Rightstuf: “Ikebukuro, Tokyo. Mikado Ryugamine is a young man who yearns for the city like no other. At the invitation of his childhood friend, Masaomi Kida, he leaves his hometown and enters Raira Academy in Ikebukuro. Masaomi warns Mikado about the mysterious organization of unknown origin known as the “Dollars” and some dangerous people in Ikebukuro to watch out for. In particular: the brawling champion Shizuo Heiwajima and hobbyist information broker Izaya Orihara.

On his first day out in the city, Mikado, remembering another of Masaomi’s stories, sees a jet-black motorcycle being driven by the fabled “Headless Rider.” From then on, a series of random attacks and events begins to occur on the streets of Ikebukuro, and a group known as the Yellow Scarves arises as Ikebukuro begins to crumble!”

The other title Aniplex announced, Read or Die, is set for release on Blu-Ray on January 18th. The box set will contain the full TV series plus three OVA episodes and also includes a 48 page booklet.

The OVAs follow “The Paper”, Yomiko Readman: “Yomiko Readman is a lovable, near-sighted bibliomaniac working as a substitute teacher at a Japanese high school. Her real identity, however, is that of a secret agent for the British Library Special Operations Division. Her codename: “The Paper.” The moniker denotes her supernatural ability to freely manipulate paper into any object she can imagine, including tools and weapons in her fight against the powerful and self-serving IJIN (Great Historical Figure) Army! Along with her partner, the enigmatic “Ms. Deep,” Yomiko travels across the world in attempt to solve the mystery behind the reincarnation of historical figures and their attempt to control the world.”

The TV series comes later and follows the Paper Sisters in a separate but somewhat related storyline: “Five years have passed since the occurrence of the incident known as the “Human Annihilation Mission.” In Japan, a novelist is dealing with writer’s block after her friend has gone missing. In Hong Kong, three sisters, masters in the use of paper, run their own detective agency to solve cases that involve books. When these people are brought together, a bond greater than blood is formed – a bond that will be sorely tested by the evil powers intent on taking over the world.”