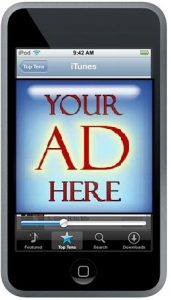 According to an article from the New York Times, Apple is now seeking a patent that displays unavoidable advertisements on any media that requires an operating system (e.g., iPhones, computers). According to the patent application, the advertisements would require the user to indicate that they noticed the advertisement either by clicking a button or answering a question of some sort. The code for this would be embedded deep into the workings of the OS or other product, making it significantly harder to work around or predict their appearance on-screen.

According to the Times article, the system would function as follows:

“What the application calls the ‘enforcement routine’ entails administering periodic tests, like displaying on top of an ad a pop-up box with a response button that must be pressed within five seconds before disappearing to confirm that the user is paying attention.

These tests ‘can be made progressively more aggressive if the user has failed a previous test,’ the application says. One option makes the response box smaller and smaller, requiring more concentration to find and banish. Or the system can require that the user press varying keyboard combinations, the current date, or the name of the advertiser upon command, again demonstrating ‘the presence of an attentive user.’

In return for this incessant ad exposure, Apple would be able to sell higher end technology at lower prices. It would function much like shareware, where you have pop-ups that bother you until you pay the extra fee to make it a full version. I for one, hope that Apple is just attempting to patent this to block other people from using it without a fee. But between this and Microsoft’s Office 2010 Starter edition that includes advertisements, this may be the future of computing. Considering the prevalence of DVRs, ad-blockers, and internet syndication of TV shows, it has become far easier for people to avoid advertisements. I suppose this is the next step to combat that. I don’t see Apple making these advertisements mandatory; it would do a lot of damage to their image with their user base. Of course, I will really get scared when Linux starts plastering ads all over the screen.

Thanks to Greg for the link to the patent itself.