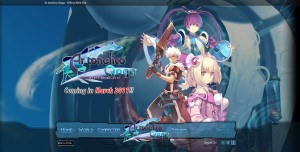 NIS America has unveiled the website for the final game in the Ar Tonelico series. The site for Ar Tonelico Qoga: Knell of Ar Ciel officially went up yesterday, but because of the recent ESRB rating, you have to be at least 17 to view it.

The site is pretty slim on details right now, but it does give you some introduction to the world of Ar Ciel and three of the main characters. I have to say that Saki looks a lot like a shorthaired version of Aurica from the first Ar Tonelico game. The few screenshots that are on the site right now are from the Japanese version of the game, but English screens should be on their way soon. You’ll also get to sample three of the songs in the background on the site (my personal favorite being number 3).

The game is sure to carry on some of the traditions of the previous titles including strengthening your Reyvateils (the girls in the game who can sing magical songs) by diving into their minds and the dialogue events between the girls. The series switches to an action-based battle system for this installment, though, more like those found in Star Ocean games.

At the site you can also catch a glimpse of the premium edition that NIS America will be offering for the game (or you can just take a look below at the picture). According to the site, you’ll be able to get your hands on Ar Tonelico Qoga sometime this March.