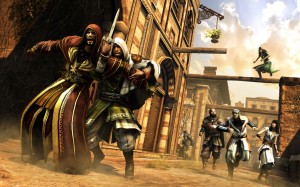 Ubisoft had previously announced that Assassin’s Creed is on an annual release schedule, so it really isn’t much surprise that the developer confirmed an October 30, 2012 release date for Assassin’s Creed 3.

Kotaku reports the announcement came during a conference call with investors. Ubisoft head Yves Guillemot claims Assassin’s Creed 3 will be “the biggest launch in Ubisoft history.” That makes sense, once you hear Guillemot say the game has been in development for three years.

Ubisoft hasn’t released any further details on the game, but the Assassin’s Creed series has always been ripe for speculation. One thing we know for sure is that the story will revolve around a new assassin, as Ubisoft confirmed that Assassin’s Creed: Revelations was the last chapter in Ezio’s and Altair’s respective tales. The setting is also going to see a change. Many fans have guessed and speculated on where the Animus will take us next, and while none of the guesses really hold much weight, a popular idea is for Assassin’s Creed 3 to take place during the American Revolution. One fan has even claimed to have seen this firsthand.