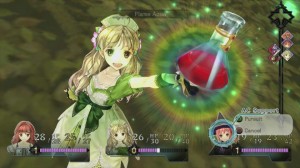 Tecmo Koei America announced some exciting news for Atelier fans today. It looks like the most recent entry in the series, Atelier Ayesha: The Alchemist of Dusk, is officially set to release in North America on March 5th.

This is fourth Atelier game for the PS3, following in the footsteps of Rorona, Totori, and Meruru. Atelier Meruru marked the close of the adventures in the established setting of Arland, so Ayesha takes place in a new region and brings in a new cast of characters. In this story, the titular heroine lives alone and makes a living by selling the medicines she crafts. When Ayesha discovers that her missing sister, Nio, is actually alive, she makes it her mission to find her younger sibling.

Atelier Ayesha is the first game in the series to be published in North America by a company other than NIS America. Tecmo Koei now owns Gust, the developer behind the Atelier games, and it is taking care of the publishing this time. Though NIS America isn’t publishing, it did handle the game’s localization.