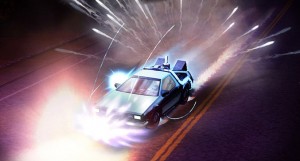 I had my doubts about the new Back to the Future game being developed by Telltale Games, but if the previews are right, it looks to be that this game will redeem the series name after those awful NES games that many people were subjected to in the 80’s. Back to the Future: The Game is setup with 5 episodes being released over time for the PC, Mac, PS3 and iPad. (Sorry, XBox, no word on when you will get it.)  The game is going to be a sequel to the Back To The Future movie trilogy.

The first episode of Back To The Future: The Game will be released December 22nd on the Mac and PC with PS3 and iPad versions to follow. The second release is in February and from then on it will be released on a monthly basis. Telltale has also released a trailer for the game that you can check out below.