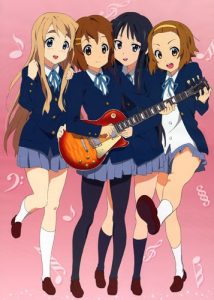 Anime Expo is a busy time for licensing announcements, and Bandai is starting things off this year with their license of K-On! The license only covers the first season of the anime, not the currently airing season two, entitled K-On!! (note the subtle difference). The anime series, based on the manga by kakifly, follows a group of high school girls who form a band. The manga series has been licensed by Yen Press in North America, and the first volume is due out this fall.

Bandai Entertainment’s license covers both DVD and Blu-ray releases, but Bandai hasn’t decided whether the series will be released in both formats. No announcements have been made about a release date or an English voice cast, but we  will update as soon as the information comes our way.