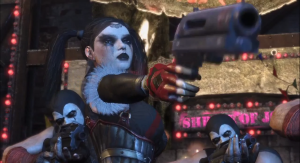 So it looks like all those Harley Quinn easter eggs that cropped up at the end of Arkham City weren’t teasing a sequel, but rather the final piece of DLC for Batman’s latest adventure.

IGN reported the news from Warner Bros today, promising that Harley Quinn’s Revenge will add about two hours of additional content. It will also be the first bit of story DLC for Arkham City.

Harley Quinn’s Revenge sends Batman back to Gotham’s super-prison one last time to thwart Harley’s final, vengeful plan. The Caped Crusader returns, but players will also get to control Robin as they battle Harley’s new gang of thugs.

The DLC comes as part of Batman: Arkham City Game of the Year Edition, which will also come with all the previous DLC (Catwoman, Nightwing, and Robin combat challenges), all of the previous character skins, and a digital download of Batman Year One.

Those who already own Arkham City can download Harley Quinn’s Revenge on PSN on May 29 for $9.99 and on XBLA on May 30 for 800 Microsoft Points. Batman: Arkham City Game of the Year Edition will also be available on May 29.

Check out the reveal trailer the Game of the Year edition below. Be sure to wait until about the 1:32 mark for a glimpse at Harley’s new digs as a teaser for the so-called final chapter.