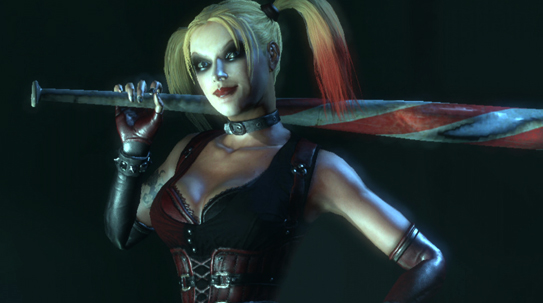 It has been over five months since the release of the highly acclaimed Batman Arkham City and thanks to PS3tropies.org news about upcoming DLC has finally surfaced.

For the moment the DLC is simply listed simply as Harley Quinn DLC with the actual trophies list suggesting this will be a story driven piece of DLC. Another thing that is clear is that you won’t be playing as the Caped Crusader this time around. Instead the Boy Wonder, Robin, will be yours to control.  Robin was initially released last year as a playable character for the Riddler Revenge challenge maps and was only featured briefly in the main single player story.

The Harley Quinn DLC appears to be a substantial piece of content that could potentially reveal what Robin was up to during the events of Arkham City or it could continue on from the games conclusion expanding on the games plot. If you have finished the game then you can connect the dots on what this might be, and if you haven’t then you really should. It appears that the DLC may tie into the Arkham City comics which revealed how Robin was getting in and out Arkham City using a boat as a Dry Dock location is mentioned in the trophy list. It is possible to suspect this will be in a similar vain to the Catwoman DLC.

Rumors have been ongoing even prior to release about future DLC with Kevin Conroy the man who voices Batman was quoted in saying.

The gaming now is a big, new thing. The thing about Arkham City is that it’s is going to be an ongoing game. You’re going to be able to download future episodes of it, so it’s going to be going on for quite a while. I’ve been recording it for a while so that will continue

The Harley Quinn DLC could be just the beginning for future episodes in which we could see the likes of Scarecrow featured due to the many hints throughout the game. Or the appearance of Nightwing as he was also a DLC character like Robin and going by the track record, both Catwoman and Robin will of received the story driven treatment.

There has been no official word from Warner Brothers or Rocksteady as of yet, but expect to hear something in the near future so keep checking back for full details. If you have yet to make your mind up about Arkham City check out our featured review.

So what are your thoughts? Are you up for a second tour in Arkham City? Let us know in the comments section below.