The Battlefield 3 Beta ended more than a week ago, and DICE was very pleased by the results. For those who were put off by the beta, many of the design choices are explained in an article written by DICE General Manager Karl Magnus Troedsson. Simply put, the build that was used for the beta was 1-2 months old, as an open beta requires a lengthy period for testing and certification. While some may be skeptical, it seems that the final product is nowhere near as glitchy as the beta. This preview from IGN goes into more detail.

Recently, DICE has released some beta statistics, and the results are quite impressive. During the open beta, over 47 billion shots were fired, over 1.5 billion kills registered, and more than 8 million users played the beta. 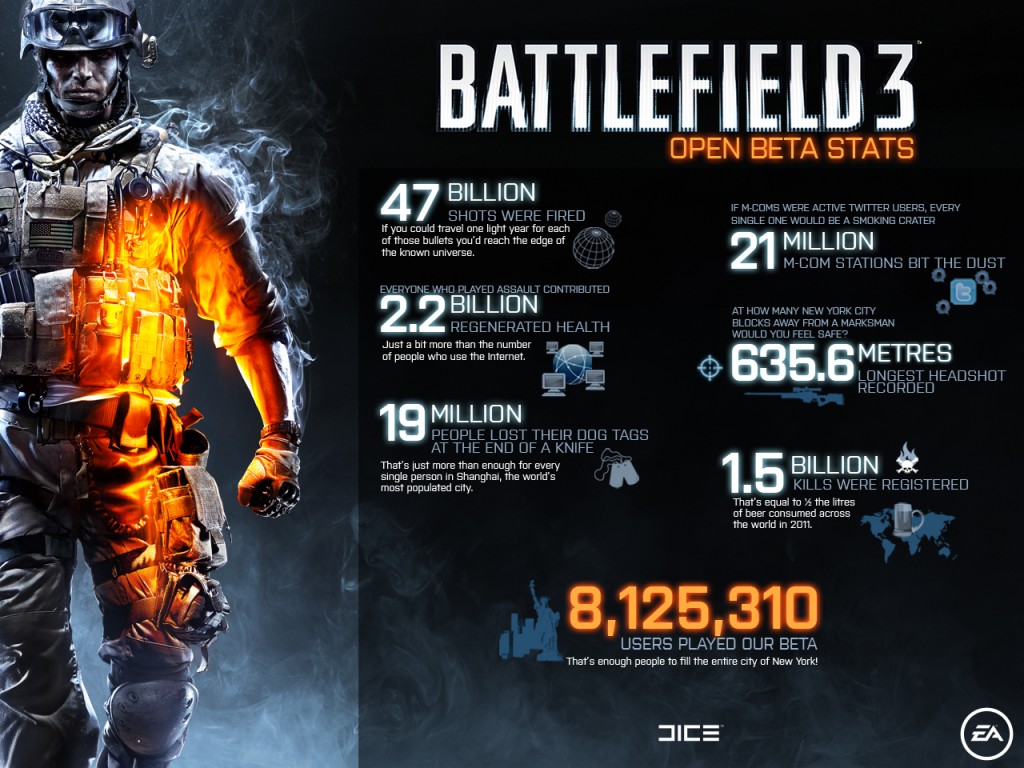 While the beta stats are impressive, a unique simulator that was teased today has caught the eyes of many. The UK television show “The Gadget Show” released a sneak peek at an exclusive hand-built simulator that was designed to produce the most immersive experience for a first person shooter game. As part of a challenge for the show’s 16th series, a team of design experts were brought together to create this simulator with technology worth over $650,000.

The simulator is designed around the world’s first, portable omni-directional treadmill, which was designed by MSE Weibull out of Sweden. The simulator allows you to control the movements of a Battlefield 3 soldier by moving your own body. The simulator also features 12 paintball markers that track the player in real time, to feel enemy gunfire that occurs in game, a wireless gun system, and ambient LED lighting couple with a hacked Xbox Kinect.

The game is projected within a 360-degree dome, which measures 4 meters high and 9 meters in diameter. Ten infra-red motion tracking cameras are used to monitor the movements of the gamer on the treadmill. This data is sent to the PC (which is running Battlefield 3) to control the direction and speed of the character. The same cameras also track the direction that the wireless gun is facing, which is used to rotate the 180-degree projected image, which serves as a means of camera control. The ambient LED lighting system showers the dome with colors from the game, and a hacked Kinect unit is used to detect crouching and jumping.

If you are interested in seeing more of this simulator, The Gadget Show “Immersive Gaming Simulator Build” episode will premiere in the UK on Monday, October 24th, on Channel 5 at 8 PM (GMT). The episode will be repeated at 8 PM on Tuesday,  October 25th, and at 10 AM on Saturday, October 29th. If you don’t live in the UK, you can get a glimpse of the simulator from this video.