We’ve all done it. As anime fans, no matter the genre, we’ve all shipped two characters together. For those that are unaware of what shipping is, it is when fans put two characters together, whether in the hopes of them becoming canon or for pure fanservice. (Let’s face it guys, EdwardxAlphonse is not going to happen!) So with Valentine’s Day here and love being in the air, let’s have a look at the most believable canon couples from anime! 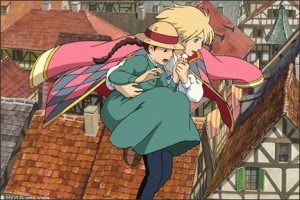 Howl and Sophie – Howl’s Moving Castle
Here is a perfect example of how a relationship can change people for the better. Howl is known throughout the land as a notorious womaniser who’s rumoured to steal women’s hearts — in the literal sense. Sophie’s a very shy girl who thinks lowly of herself in terms of appearance. Things change when a spell is cast upon her, and she’s transformed into an old woman, but she begins to feel more confident. Through his interaction with Sophie, Howl himself begins to look beyond his shallowness and fall for her. They better themselves through each other, and that’s why they work so well as a couple. It’s not even that much of a lovey-dovey Disney couple, either. There are times Sophie gets incredibly angry with Howl, but that only adds to the chemistry and realism (As realistic as a Miyazaki film can get anyway!) of their relationship. 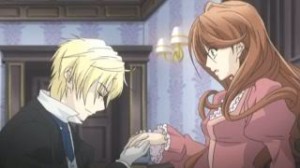 Edgar and Lydia – Hakushaku to Yousei
Similar to Sophie above, the main character Lydia is a girl with very little self confidence, believing no one will ever love her. This makes her identifiable with a lot of young females who are more reserved. Edgar is also quite like Howl in the way that he’s both good looking and flirtatious. What makes this relationship different and just that little bit stronger is that you can see Edgar trying to win Lydia’s affections, and her internal debate on whether she should believe his intentions. There’s a lot more comedy in this one, considering the banter that goes on with Edgar, Lydia and any other potential lover in this story. And it’s this element that makes Hakushaku to Yousei such an enjoyable series, even for people who aren’t anime fans — as I’ve explained before! 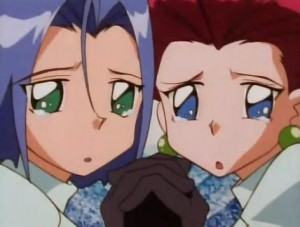 Jessie and James – Pokémon
Before going into depth about why they work as a couple, it should be mentioned that Jessie and James are, in fact, a canon couple. Although only hinted at in the English dub, both the Japanese dub and the manga clarify the nature of Jessie and James’ relationship; they even get married at the end of the manga! Even so, it is still very much hinted at in the English dub. They have a friendship so strong that you just know that some feelings must be there. That bond alone shows just how much chemistry the duo have. Although they bicker and fight (Jessie fighting with James moreso than the other way around) when it comes down to it, Jessie and James will die for one another — sounding very much like an old married couple the whole time. One more thing that makes them highly compatible is their common goal: they both want to obtain power and standing through Pikachu’s capture. Having a common goal with a partner can strengthen the bond of a relationship. 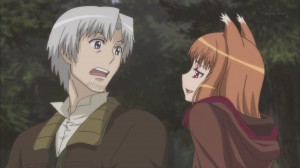 Horo and Lawrence – Spice and Wolf
Here is the epitome of a flirtationship. Horo (or Holo depending on the translation) loves to tease Lawrence. Being a sexy wolf deity, she is very comfortable with herself and knows exactly what buttons to press with Lawrence in order to make him flustered. As the series continues, Lawrence’s confidence grows and he starts to respond to, and even challenge, Horo’s flirtatious ways. This is a great foundation as it gives them that obvious tension; however, there is far more to the relationship than just sexual undertones. Horo and Lawrence do actually talk about deep and sensitive subjects, such as Horo’s fear of loneliness, opening the door for a more rounded relationship. They also happen to be business partners, which puts them on an equal level in terms of importance and intelligence at times. Despite Spice and Wolf being set in Medieval times, it is quite a timeless relationship that anyone can identify with. 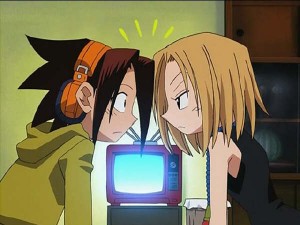 Yoh and Anna – Shaman King
Like Jesse and James, this is another couple that needs to be looked at from the manga. In the English dub of Shaman King, it is stated that Anna saved Yoh’s life and as a result he promised her he would marry her, thinking he would never see her again. In the Japanese dub, it is explained that they have an arranged marriage. The manga, on the other hand, clears up this confusion. In fact, there’s a whole volume solely dedicated to how Yoh and Anna met, and it is a tearjerker to say the least. Anna, who is known for her very cold and serious nature, is shown in a whole new light. She has the ability to read minds but can only see the darkness in people’s hearts. Yoh’s family took her on after her own parents abandoned her; this results in her arranged marriage to Yoh. Neither are too happy about it, but they do manage to hit it off. Problems arise when Anna is stolen by a demon, and Yoh has to save her. Anna sees that Yoh is a kind-hearted boy and begins to fall for him. He makes a promise that’ll he would win the Shaman Tournament in order to make her happy, so she can have an easy life. How much dedication and love is that? Yoh and Anna’s relationship shows that you don’t have to be all about public displays of affection to have a really strong bond. Despite having an arranged marriage, the two of them are deeply in love — even if they don’t show it publicly. 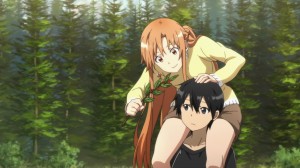 Kirito and Asuna: Sword Art Online
Any hopeless romantic has dreamed of that one person who would go to the ends of the world for them, but Kirito quite literally does for Asuna. He fights his way past innumerable obstacles just to be with her. If that doesn’t show what true love is, than nothing else can. More than just a fantasy though, Kirito and Asuna’s relationship also reflects modern society. In an age where everything is now dependent on the Internet, love lives are no exception. Every so often, a person will find “the one”, but they’ll be too far away, yet the couple will fight tooth and nail to be together nonetheless. As a person who is going through the exact same thing, it makes them highly identifiable for me and many others. From a critical standpoint, while Kirito and Asuna don’t have as much chemistry as some of the other couples mentioned, they do show plenty of playful and heartfelt moments and their reunion is one of the most touching scenes ever. However, just the sheer fact that they fight to be with one another is enough to show how deep their love is.

And hats off to Sword Art Online for having a mid-season love confession instead of dragging it out all series! …Like InuYasha… 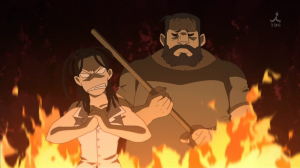 Izumi and Sig: Fullmetal Alchemist
With Sig Curtis being a side character, this maybe seem to be a rather odd choice for a believable canon couple. Nevertheless, it is one of the most heartwarming of anime relationships. This all centers around what the two of them went through as a couple: Being a newly-married couple, the next step was having children. Izumi gave birth to a stillborn. Distraught, she used the forbidden alchemy of human transmutation in an attempt to bring the child back to life. It was unsuccessful and resulted in a number of Izumi’s organs being removed, making her fragile, and causing her to cough up blood every so often. Even with that happening, Sig stuck with Izumi through it all, just like any dedicated and loving husband would, never faulting her for her choice. That is true love. Never judging, just being there for your loved one. Despite their circumstances, the relationship is not all doom and gloom from this tragic past; it’s quite the opposite. They’re pretty lovey-dovey, though sometimes just for comedic effect. Even in the heat of battle, they will be cutesy with one another. This is made even more hilarious by the fact that Izumi as a character is anything but loving with any other character in the show. Despite the odd maternal moment she has, she is for the most part, a short-tempered lady who strikes fear into the hearts of Edward and Alphonse, her alchemy students.

Even though anime relationships are mostly wish fulfillment and fan service, they can be very heart warming and give people hope for their own relationships. Disagree with the couples on this list, or think of one we missed? Why not comment with your favorite couple (canon or non-canon) and explain why down below! And, of course, happy Valentine’s Day!