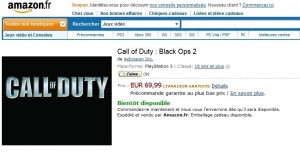 Its always good to take retailer leaks with a grain of salt, but Activision is reacting rather strongly to the news; methinks they doth protest too much.  Call of Duty: Black Ops 2 has apparently been revealed on Amazon France’s website.  The product post was quickly changed to simply Call of Duty 9, but not before shoppers were able to snag some screen-caps of the page to share their discovery with the rest of the web.  The pictures and story made their way to gaming sites quickly, and at least a few have reportedly been contacted with C&D orders by Activision.  Gameblog, a French gaming site, even says that they have been blacklisted by Activision for not removing their article on the topic.  Had Activision ignored the leak as a typo on Amazon’s part, it probably would have passed by without much notice, but by calling out the lawyers and PR department, they’ve given a good bit of credence to the rumors.  So, like I said, take this with a grain of salt, but in all likelihood we’ll be seeing another Treyarch iteration of the CoD franchise this fall.