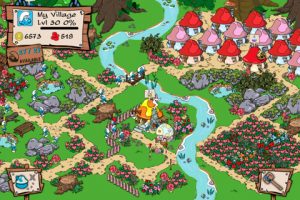 This story has been updated. See end of post.
Smurfs Village, by Capcom, is one of the top grossing apps for the iOS platform (iPhone and iPad). It’s basically a mix of Harvest Moon and Sim City. You grow crops on your farm while expanding the Smurf village. You can also play mini-games with the other Smurfs. To help speed up your progress you can purchase items, upgrades, and other goodies using real cash in game. Well apparently Capcom didn’t think that having that feature in a game rated for ages 4+ would cause so much trouble.

The purchasing of these virtual goods is so easy that children are racking up huge bills. One 8 yr-old purchased $1400 worth of upgrades. She is apparently not alone in thinking that the purchases were just part of the game. We’ve all played games that use coins, rupees, silver, gil, etc.. that are found in game to make purchases. Children are buying these products not realizing that real money is being charged to the credit card that is linked to the iTunes account that originally purchased the game. This is due to the fact that Apple keeps you logged in to iTunes for 15 minutes if you do not specifically hit the log out button. This is what allowed the children to make purchases, as many of them made the transactions during that 15 minute window after their parent downloaded the game.

PocketGamer cites a “well-placed source” that Apple has been in talks with Capcom about the problem. Capcom now lists a warning on the download page that purchases can be made in game. They also say that Apple will now time out iTunes log ins at 5 minutes instead of 15.

But many parents say this is not enough. That micro-payments should not even be a part of a game for children. And I would agree. Any extra purchases should be done from the iTunes store and not from in the game. That way any purchases can be reasonably seen as being made by the account holder and not a child. Any company that does in-game transactions on childrens games has to be expecting that the children will make purchases without thinking about it. Imagine the trouble you would see if Pokemon allowed in-game transactions? Unlimited Master Balls anyone? 8-0

Capcom / Apple may have refunded that $1400 purchase due to the news coverage but how many parents just had to pay the $50 or so that most kids could rack up in 15 minutes? That can turn a serious profit from what I feel is a very dishonest technique.

What do you think? Should micro-transactions be limited based on the expected age of the player? Or should all the transactions take place outside the game?

Updated:Pocket Gamer has just been sent an email from Capcom denying that Apple “approached it about problems with parents complaining about excessive in-app purchases and requests for refunds.”

“We are in frequent communication with Apple, and at no point have they expressed any displeasure to any representatives of Capcom Mobile in regards to our handling of in-app purchases within Smurfs’ Village,” a company representative wrote.

They did confirm that the $1400 refund came from Apples account and not theirs. “If parents think their child may have purchased in-app content by accident, we recommend that they contact Apple for a refund,” the publisher commented.