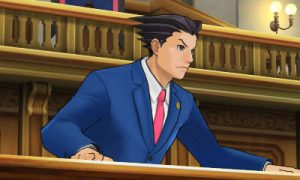 The long awaited fifth game in the Ace Attorney series, titled Ace Attorney: Dual Destinies, is coming to the United States this fall, as fans learned earlier this month. They also learned that characters such as Miles Edgeworth and Apollo Justice (give or take a few parts) were returning, along with new characters such as Athena Sykes, who can hear the emotion behind people’s words to find the truth. What surprised fans most was that the game was getting a 3DS eShop release only, with no physical copies planned. Kotaku looked into Capcom’s reasoning for such and got this response back:

“Historically it’s been tough to attract long term retail support for Ace Attorney titles. With the release of Phoenix Wright: Ace Attorney – Dual Destinies we wanted as many people as possible to be able to enjoy the game for as long as possible. With that in mind we have opted for a digital only release via the Nintendo 3DS eShop.

We understand that this decision may upset fans who wanted to have a physical version of the title to add to their collection but we believe this direction is the best to take to ensure that fans are able to enjoy the game at their own leisure.

We will be confirming details on the price point soon so please stay tuned for more information on the latest in the Ace Attorney series.”

Since then, Capcom USA Senior VP Christian Svensson took to the forums to answer fans’ questions about the digital only announcement. One asked if Capcom expects lower sales due to the eShop-only release, to which Svensson replied, “If fans really love the series and want to play the game in English, we’re expecting them to be there. If they’re not, well, that tells us something too.”

Another asked if success with Dual Destinies would have any affect on Ace Attorney Investigations 2 coming over, and Svensson’s response was that it relies heavily on the upcoming sales figures:

“I understand the desire and I continue to make requests for AAI2 to Eschiro-san and Ichii-san (my boss). As it is, all dev and localization focus has been on AA5 and the last data point we have to work from was AAI, which as I’ve shared in the past, was poor at best. If AA5 hits its forecast, we’ll have a different data point to show from a different distribution mechanism. At minimum, there will be  info to evaluate, one way or the other after AA5.”

And for those who can read Japanese (or are willing to fudge your way through anyway), there’s a demo up over on the Capcom Japan site.

With that, Dual Destinies becomes one of the few games in the 3DS eShopto have a physical release in Japan, but a digital release in America (like Unchained Blades, for example). The digital release may let the series continue across the ocean, however. How do you feel about the 3DS eShop only release? Will it help sales or hurt them? Post in the comments below.