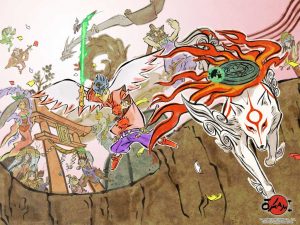 Okami has already been out on both the PS2 and the Wii for a while, but soon, fans will have yet another way to enjoy this beautiful game.

Capcom has announced plans to release Okami HD for download on the PSN this fall. As the title would imply, Okami HD will have “fully integrated HD graphics” and will have a 16:9 aspect ratio. PlayStation Move owners will be able to use motion controls to draw with Ammy’s Celestial Brush, but the game will also support the Dualshock 3 controller. For the achievement lovers out there, Capcom also noted that Okami HD will have a “full suite” of PS3 trophies. You can check out the reveal trailer below.

Okami was originally released for the PS2 back in 2006. It follows the story of the Japanese sun goddess, Amaterasu, and her Celestial Envoy, Issun, as they travel the ruined land to restore life in the wake of a monster’s curse. Ammy must use her magical brush abilities to defeat demons, solve puzzles, and bring color back to the world.

Are you looking forward to seeing Okami’s lovely, watercolor-esque graphics in HD? Share your thoughts in the comments!