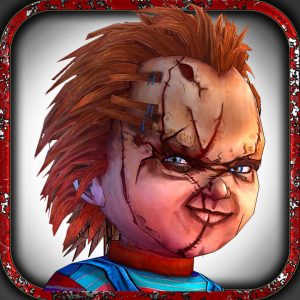 Chucky the killer doll scared us when he went on his murderous rampages in Child’s Play, then he became a family man when he got married and even had a kid. Now he’s coming out of retirement to do what he does best: kill everything and everyone that crosses his path. Chucky: Slash & Dash, is an upcoming game that is in development by Slimstown Studios with an agreement to Universal Partnerships and Licensing.

Chucky: Slash & Dash is an endless runner game which will be released on iPhone, iPad, iPod Touch and Android devices. An endless runner game is a game where you play until you die, notable examples being the ever popular Canabalt, Subway Surfer, Jetpack Joyride, and Robot Unicorn Attack. There are a number of endless runners where you aren’t just running, adding simple gameplay mechanics to their never ending levels. In Chucky’s endless runner, he is stuck in a factory that produces Good Guys dolls. You control Chucky as he sprints through the factory floor, the catwalks, the warehouse and even outside. You will also need to avoid conveyor belts, forklifts, acid pools, barrels and a variety of other obstacles.

Of course it wouldn’t be in the spirit of Chucky without mayhem. There will be security guards patrolling the factory that Chucky can dispatch with his iconic knife or other weapons like a cleaver, a screwdriver or even a hatchet. As you play, you will need to collect batteries which will be used to purchase in-game items, bonuses and power-ups.

Unfortunately there is no release date for Chucky: Slash & Dash as of yet, but let’s cross our fingers for it to be here soon. Until then, we just have to hold out with the other endless runner apps out there, or watch the little teaser trailer below.