Hi all!  I’ve been behind the scenes here at the blog but I have been asked to create some content for the site.   The spotlight posts are open to all type of comics, be they web, print, or manga format. There are of course loads of indexes for webcomics out there, and tons of hosted comic spaces like Keenspot or DrunkDuck, but which ones are the good ones?  Obviously, the choices I make for the Comic Spotlight are based on personal preference and whether or not I would recommend them to a friend or general audience.    Also, since I am female, they may be slanted more towards female audiences, but I will indicate that in my review.

I think this comic can be enjoyed by both males and females equally.

Taken from the site:

Set in Montreal, the finest bohemian city in North America, Ma3 follows the lives of comic book geek, Gary and his way-sexier-than-he-is roommates in their Montreal tight-as-a-sandwich apartment; where the walls are so thin there are virtually no barriers between their rooms.

What I love about this comic first and foremost, and usually any comic, is the art. It’s classic,  clean, and very easy to read. The backgrounds don’t fight with the characters or text bubbles to make it unreadable, and the strip is just that, a strip with usually 4 panels of story. For this comic I think that’s perfect. Some comics do full pages, but I don’t think the effect would be the same here with a full page layout.

I really don’t know how to describe the content to you…It’s naughty, but not filthy, and sometimes not appropriate for work because of the female nudity and token gay guy booty shot, but the art lends itself to a more innocent atmosphere.  It doesn’t make you feel dirty reading it.  There are a lot of bondage references, nudity, lesbian and gay sexual innuendo, but it all feels natural in this setting and the way it’s done ‘deguiltifies’ sex in the public viewing space for those, like me, who are a little shy around the edges.

For example  (all of these images are of course copyright Gisèle Lagacé):

That one’s just for the Mario nerds out there. 🙂
Below are some slightly more hardcore panels from various strips. If these don’t make you want to read this comic, then apparently your hormones and sense of humor and adventure are non-existant. 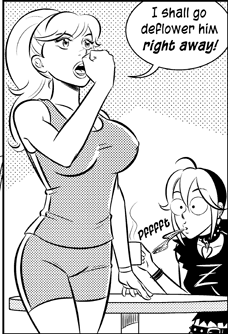 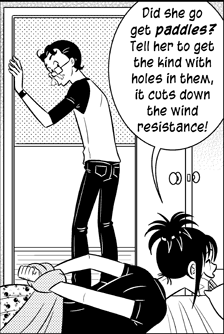 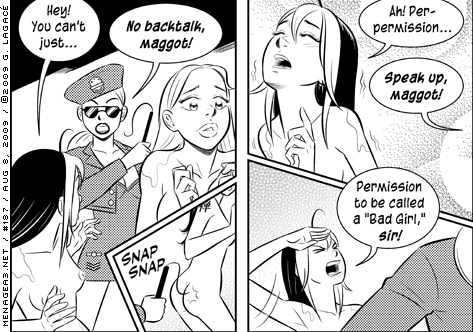 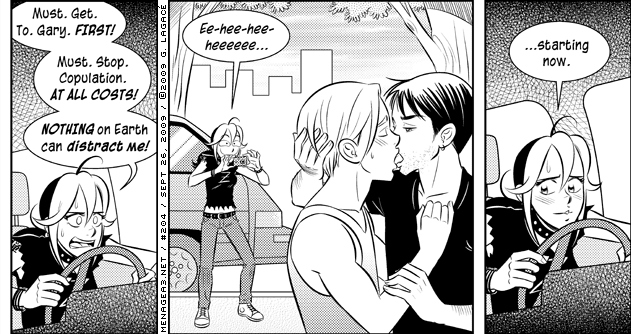 I love the art for this comic so much, but the content just makes it hilarious.  It’s a fairly new comic so it doesn’t have hundreds and hundreds of pages to read through like The Wotch.

I highly recommend you check out Ménage à 3 and leave a comment to let us know how you liked it.