There is so much to say about Misfile, I don’t even know where to start…

Let me first say, this comic is definitely enjoyable by both guys and gals.

Misfile I think first and foremost is a comic that centers around cars and casual racing.  This is the vehicle…pun intended…by which the characters relate to each other for the most part.

The two major characters incidentally are female. mages below are of course copyright Chris Hazelton.

Let me start from the beginning…

Misfile is a comic that begins with a pot smoking angel in heaven.  Pot apparently affects angels the same way it affects humans, because this angel made a filing mistake up in heaven, consequently altering the lives of two young people while the rest of the world stayed the same.

Ash who is arguably the most affected by this misfile, was previously a guy, and now has been turned into a girl.  Ash in this universe actually HAS a relationship with her mother, which is nice. No one has any memory of Ash being male except Ash herself.    Apparently misfiles correct for paradoxes.

Emily lost an entire 2 years of high school, which is extremely annoying for her because he studied her butt off, didn’t have any fun, and just had been accepted into Harvard.  Now she has to repeat those years and all that hard work.  On top of that, any friends she had are still seniors, and she’s now been demoted 2 grades.

So the angel responsible for this mess, Rumisiel, gets put on leave and goes down to earth to find out what he messed up.  He introduces Ash to Emily who both went to the same school, and that’s how their friendship begins.

Yes, there are hints of it being more than a friendship, but it hasn’t progressed that much in 1300 pages.  Since Ash is currently a girl but still thinks like a boy, and Emily finds herself liking Ash despite being straight, there is some angst to be expected.

This is not one of your arbitrary “gender change” comics – believe me they are out there.  I’ve tried to read a couple that were just ridiculous.  In this case the gender change is more a catalyst for a friendship between two people with a similar problem, and I think it teaches both of them something new about themselves.  Emily is learning to take interest in things other than school, and Ash is just…learning how female hormones work I guess.   You could say she’s discovering the double standard.

This is not a short comic.  It has been going one for a LONG time and there are way too many things that have happened to cover here.  This isn’t a recap anyway.  This nice thing about the site is how it counts the pages in the URL and not by some crazy date code, so I can tell you there are currently, as of this posting, 1371 pages of Misfile. 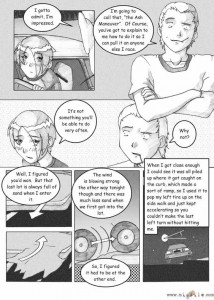 Misfile is one of those comics that, since it has been going on so long, has transformed and evolved over its lifetime.  If you look at this page to the right and you look at page 5, they are totally different art styles and even some character designs have changed somewhat.  Over time his eyes have definitely gotten smaller, and that’s probably the hardest thing for me when I draw fan art of Chris’s style.  But now it’s such a Misfile characteristic that it’s hard to image the characters without smaller eyes.


Chris works all in pencil from what I can tell, and it works well for the comic as a style choice now that the pencil lines are almost like inks.  Standard comic tones are kept to a minimum, as most of the shading is done in pencil.

He is also available for commission, meaning he will draw for you for a price.