Red String is probably one of the few comics I read that are targeted, in my opinion, at young women.  Not to say that guys can’t enjoy this comic as well, but it certainly has that distinctive ‘shoujo’ manga feel along the lines of Hana Kimi, Hana Yori Dango, or Peach Girl.  It is also appropriate for young teens, maybe 12 and up.  On Gina’s Profile page, she lists the first two volumes as 10+, and by Volume 3 the rating increases to 13+.  That’s very appropriate.  There has really only been one overtly obvious sexual innuendo, but the comic is mostly about high school students and their relationships so some emotional and parental stress and self discovery is expected.

The title Red String refers to the string of fate that is said to connect two people that are meant to be together and are destined lovers.   First and foremost, Gina says that this comic is about love, all types of love.  She addresses some female to female love, the love of friends, and the love of an engaged couple among others.  For more information, there is even a Wikipedia entry for the comic. 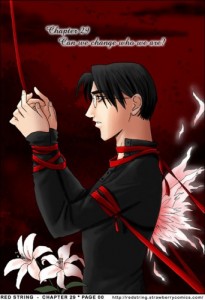 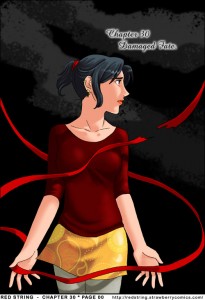 The story is set in Japan and starts with a common problem in manga.  In this case, Miharu’s mother and her mother’s best friend made a deal way back when that their kids should get married, so one day Miharu comes home to find out she has a fiancé.  Of course, Miharu accidentally meets said fiancé Kazuo after storming out of the house and has an entire evening with him without realizing that he’s the intended.  When she finds out, she’s confused and a little bit upset. But she takes a chance, and they start a relationship.

Miharu is a typical ‘problem child’ in the opinion of the Japanese school teachers. She regularly dyes her hair blonde and is not the subdued obedient child that is the ideal. Kazuo is the only son of a businessman, and as such is required to take over the family business when his father retires even though he secretly has a passion for cooking. Gina also follows a few of Miharu’s friends in their quest to find love.

It’s a story that has a steady pace, and you feel like you are moving towards a crisis point; so, it’s not an aimless daily strip.  It moves kind of slow depending on what characters Gina follows (there are 3 pairs at the moment that she switches between…if I remember them all.)  Sometimes the switches of focus seem oddly placed, and you forget what was happening with the previous pair when she gets back to them, but all in all it is easy to pick back up.

Gina’s art has improved a lot, though the changes are more subtle than Misfile or some other comics.  She was never really a poor artist when she started Red String, but her proportions are better and more consistent, though I have a hard time differentiating the characters now for some reason. All this comic making has improved her art, and the comic flow has altered a bit and looks more polished to me.

There are currently 5 books available in print. Red String is published by Dark Horse; so, you might find it at your local bookstore. I was able to pick up the first volume at Borders and they have the first 3 listed at borders.com.  I’m so happy to be able to support a webcomicker as she tells her story. If it’s not available, I don’t know if stores in your area can special order Red String for you, but it’s cheaper to get them from her website.  Plus, she offers deluxe kits which include signatures and other extras.

Red String Currently has 36 chapters…average 24 pages per chapter and that’s over 800 pages so far.  A little more than half as much as Misfile, but that’s a lot of pages. 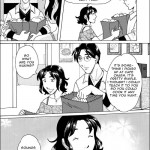 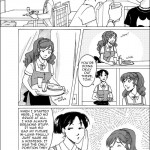 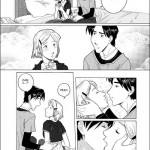