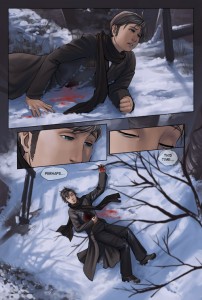 The Phoenix Requiem is a comic created by Sarah Ellerton. THIS COMIC IS HIGHLY RECOMMENDED!

Before I say much about this comic, I want to point out that Sarah has 2 other webcomics: Inverloch, which has been completed, and another comic currently updating called Dreamless (written by Bobby Crosby of Last Blood, Marry Me, and +EV).  All of her comics can be accessed through http://seraph-inn.com/.  I think it’s important to look at all of an artist’s work when you’re aware of it, so comparisons to Inverloch and Dreamless will appear here. Please visit the Inverloch website and the Dreamless website as a reference for this spotlight.

The Phoenix Requiem is a comic I LOVE to read.  The main draw for me is definitely the art, and of that mostly the backgrounds.  Having such thoroughly atmospheric, yet at the same time detailed backgrounds is an inspiration to those of us artists that have a hard time with creating the world in which our characters live.  This comic is set in a Victorian-inspired era, and the backgrounds and color choices show it.  It’s very robust, and very cohesive.  I just love it.  There’s no other way to say it. 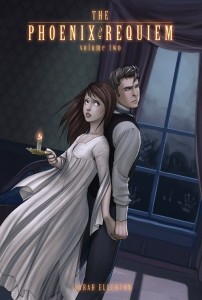 The Phoenix Requiem is a Victorian-inspired supernatural fantasy story about faith, love, death, and the things we believe in.

On a cold December night, a gentleman stumbles into the town of Esk, gunshot wounds leaving a trail of blood in the snow behind him. Despite making a full recovery at the hands of an inexperienced nurse – and deciding to make a new life for himself in the town – he is unable to escape the supernatural beings, both good and bad, that seem to follow him like shadows.

As they try to discover why, the nurse must question her beliefs and risk her own life in order to protect her family, her friends, and those that she loves.

Dan told me that there are basically 3 plots that start an RPG:  stranger/person comes to town, something happens to town, or person leaves town.   This could qualify as stranger comes to town and something happens to town. Requiem takes place in a world where there once were Hellions and Spirits.  While they were free, there was magic in the world.  The Spirits seem to be trapped at the moment, but indications are pointing to a comeback.

The stranger’s name is Jonas Faulkner, and his past is pretty vague even at page 500.  He came to the town of Esk wounded and weary, where Anya nurses him back to health.  Spirits seem to follow Jonas wherever he goes, and it seems they want his help with something.

The other “main character” is Anya Katsukova, a nurse.  She aspires to be something more one day, though in this universe a woman aspiring to be a doctor is apparently unheard of.  She is an independent woman working for a living when most women were taken care of by their husbands.

Supporting cast include Robyn Hart, an ex-soldier who not-so-subtley wants to marry Anya.  I think he loves her in a way that would be smothering…he wants to keep her safe, but would probably end up isolating her from the world to keep her from harm.  Anya, as you may have guessed, does not return Robyn’s feelings.

Also there is Petria Grey who knows Robyn very well.  My summation is that she used to be employed in a brothel, as she is very forward and unlady-like, but usually very funny.

The last recurring character I’ll mention is Patrick Armand, a policeman who has been tracking Jonas for some time.  When a plague appears in places Jonas been, and follows him to Esk, Armand tries to get answers.

I don’t want to give out too much of the plot, so I have selected images that are as non-spoiling as possible. 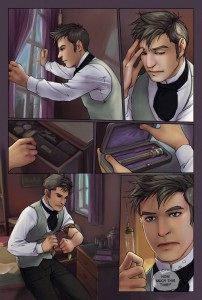 Pheonix Requiem really shows off Sarah’s talent.  Inverloch is in a very different, more cel shaded style, but the backgrounds grow to be the highlight.  Her artwork has progressed a lot!  It’s a great pleasure to watch her style develop through Inverloch and even through the Pheonix Requiem.

Traditional linework is taking less of a role in Requiem now, at page 517, than it did at the very start of the comic.  Lines are thinner and blend more into the characters and backgrounds, even though they are still black on my monitor.  Character designs haven’t changed much, but the way Sarah draws characters evolves.  In Inverloch it’s a lot more noticeable that the characters at the beginning of the comic are posed and drawn more statically than at the end of the comic.  I think this also happens in Requiem, but to a far lesser degree so far.

As I’ve been going through images to post here, I also noticed that characters also seem more realistically shaded and proportioned. I didn’t even notice until now. Sarah’s shading was excellent to begin with, but somehow it seems she’s gotten even better, and her characters seems even closer to life than before. With so much detail there is the illusion of getting to know the characters more quickly than usual in a web comic without rich color.

I think Dreamless has influenced her on Requiem just a bit.  Dreamless has no real linework, and is pretty much all painting.  It’s really amazing, but I think this has contributed to Requiem in a small way.

All this means is that she’s constantly improving.

The images here are copyright Sarah Ellerton and I have posted them without her consent, but am providing links to her websites. I think Inverloch was once available in print, but Requiem is not as of yet. I think there may be plans for it to be printed in the future.

“Sketches are done in Photoshop, Lineart in Painter, and colours / backgrounds in Photoshop.”

“All of her artwork is created in Painter and Photoshop on a PC with a Wacom drawing tablet.”