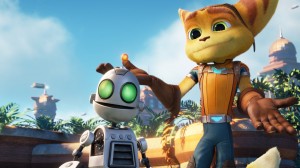 Just so you know, yes you read the title correctly. Sony Picures along with Rainmaker Entertainment and Blockade Entertainment are in the process of creating a Ratchet and Clank movie, based, obviously, off of the Ratchet and Clank games. It was announced in April 2013 by Sony through the PSN and was accompanied by a teaser trailer (featured below). Insomniac Games, the ones responsible for the acclaimed series, will play a role in the film’s production, screenplay, character development and animation consultant. This should help keep the integrity of the original games when transitioning to the silver screen.

The plot of the movie is an alternate retelling of the events of the first game with some elements from the sequels thrown in. It starts when Ratchet and Clank first meet and tells how they will unite to fight Chairman Drek to prevent his evil plan of taking and destroying other planets to create his own and how they will also join with the Galactic Rangers to save the galaxy from Chairman Drek and the Blarg race.

A good number of the original voice actors will be reprising their roles for the movie: James Arnold Taylor as Ratchet the lombax, David Kaye as Clank the trusty robot side kick, Jim Ward as the corny hero Captain Qwark, and Armin Shimerman as Doctor Nefarious. At this time, though, it is unknown who will be playing the role of Chairman Drek.

Unfortunately, the movie isn’t set to be released until sometime in early 2015, but hopefully that gives them the chance to do everything just right. Now, if we could only get movies for other heroic duos like Jak and Daxter or Banjo and Kazooie, better yet how about we try to give Spyro the Dragon another shot.