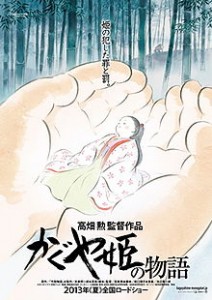 Ever seen Inuyasha: Castle Beyond the Looking Glass? It’s the second in the series of Inuyasha movies. First, you’re probably wondering why I’m talking about Inuyasha when the title clearly states this is about a Studio Ghibli film. Well, if you’ve seen Castle Beyond the Looking Glass and if you know Japanese folklore, you’d know that it references the story “The Tale of the Bamboo Cutter.” This is the same story that the new Studio Ghibli film The Tale of Princess Kaguya is based off of.

Due to be released in Japan this November, The Tale of Princess Kaguya is about a bamboo cutter who one day finds a baby the size of his thumb in a stalk of bamboo. Her name becomes Kaguya and she grows up to be an extraordinarily beautiful woman. As the news of her beauty spreads across the land, she gains five suitors who wish to wed her. She sends them on near impossible quests to retrieve legendary items and eventually gains the attention of the Emperor himself.

The Tale of Princess Kaguya is being directed by Isao Takahata, who is responsible for many of Studio Ghibli’s other anime features such as the war-themed Grave of the Fireflies, the popular comedy My Neighbors the Yamadas, and the romantic drama Only Yesterday.

From the teaser trailer below, we can see that this film will have a distinctive art style. Since it is a Studio Ghibli film, the movie will be scored by Joe Hisaishi, and the chances are high that we will see this movie commercialized in the States before too long.