Crunchyroll has been doing really well these days, as they have two more anime series to simulcast this spring: Zettai Boei Leviatan and Gargantia on the Verdurous Planet. 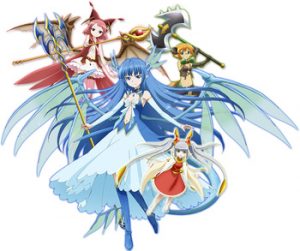 Zettai Boei Leviatan ,or Absolute Defense Leviathan began its simulcast on April 6th at 11 a.m. Pacific time for members in North America, the United Kingdom, Ireland, South Africa, Australia, New Zealand, the Netherlands, Scandinavia, Turkey, Central America, and South America. Based on the mobile RPG game developed by GREE, Zettai Boei Leviatan is about a world where evil creatures threaten all living things on the planet.  The story follows the fairy Syrup and three dragon girls Leviathan, Bahamut, and Jormungand as they fight off evil forces. 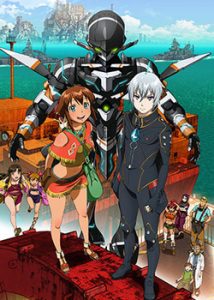 Gargantia on the Verdurous Planet began to simulcast starting April 7th at 10 a.m. for members in the United States, Canada, the United Kingdom, Ireland, Australia, New Zealand, Sweden, Denmark, Norway, Finland, the Netherlands, Spain, South Africa, Turkey, Brazil, and Portugal. The story takes place in a far galaxy where the Human Galactic Alliance has been fighting off a race of grotesque alien creatures.  One day, the young lieutenant Red is swallowed up into a distortion of time and space to wake up in Earth, a world in peace without wars.  Now Red has to live on Earth without the knowledge on the planet’s history, and hoping to return to his galaxy one day.

The series is produced by Nitroplus and directed by Kazuya Murata.  The original manga artist Hanaharu Naruko is also designing the characters for the anime.

Both anime will be available on the Crunchyroll website and apps on iPhone, iPad, Android, Windows Phone, PS3, Xbox 360 and other streaming devices.  Be sure to check them out!