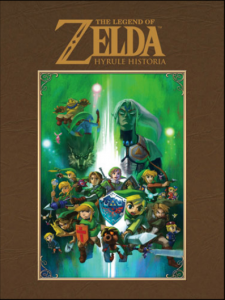 Shogakukan published The Legend of Zelda: Hyrule Historia, an encyclopedia on the video game series of the same name, in Japan earlier this year. Well, fans that have been hoping the book would be localized now have good reason to be excited. Diamond Book Distributors recently included Hyrule Historia in a list of publications on Dark Horse Comics’ release schedule for January 2013.

The coffee table book’s contents include a detailed history of the series (right down to an official timeline of the games), never-before-seen concept art, and an introduction from Shigeru Miyamoto. Its pages even contain an exclusive comic by Akira Himekawa, creator of The Legend of Zelda manga.

If you’re looking to add Hyrule Historia to your collection, mark your calendar for its ship date, which is listed as January 29, 2013. The release schedule indicates a retail prices of US$34.99 and CAN$38.99.

Note: This is just speculation, but the news about Hyrule Historia may have been an accidental leak. Originally, there was a PDF from Diamond Book Distributors that showed Dark Horse’s release schedule for January 2013, but it seems to have been taken down.

Update 8/17/2012: It’s official! A recent e-mail from Dark Horse confirmed the announcement. They also noted that the image you see here will not be the final cover art, and you can actually pre-order Hyrule Historia on Amazon for just over $20.