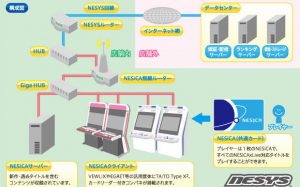 At the 48th Amusement Machine Show in Chiba, Taito announced “NESiCAxLive,” a digital distribution system for arcades. The arcade has bee dying a very slow death since home consoles caught on. There are many who still make the cabinets but they are still very expensive to make and distribute as each cabinets mother board has the game pre-installed or the game disc will only load on certain motherboards. Taito wants to change all that by making a generic cabinet and having the system download any game from their servers.

This would greatly reduce the costs of the cabinets and allow operators to rotate games on a daily basis if they really wanted to. Taito says nine companies, including SNK Playmore and Cave, have already signed up to have their games distributed through the NESiCAxLive platform. Future plans include allowing the players to choose the game from an onscreen list every time they add money to the machine.

I got to say I might just hit the ol’ arcade every time I go to the mall if this system was in place. There have been a lot of arcade games that did not transfer well to the home console. This is due to lack of joystick, button configurations on controllers, and for my favorite game, Virtual-On, the lack of dual stick controls.

How about you? Do you still go to arcades? Would you go back with this system in place?