Summer is ending, and I could not be more excited; the summer games drought is over! Here are two games, in particular, that are pushing gaming in a fresh direction.

Divekick
Divekick launched on August 20th, and I have been playing it pretty much nonstop since. That said, I haven’t played it extensively enough for a well-thought out review. My thoughts thus far, you ask? Go play it. Right now. Seriously, stop reading, bookmark this page, and download Divekick ($9.99, PSN). You’re at work, you say? Well, vomit in a trashcan, or something. I don’t know; do what you need to do!

Divekick is, perhaps, the simplest game to come out in years. That’s saying a lot, because it’s an arcade fighter, and those tend be simple, all things considered—but Divekick takes that simplicity to a new level. 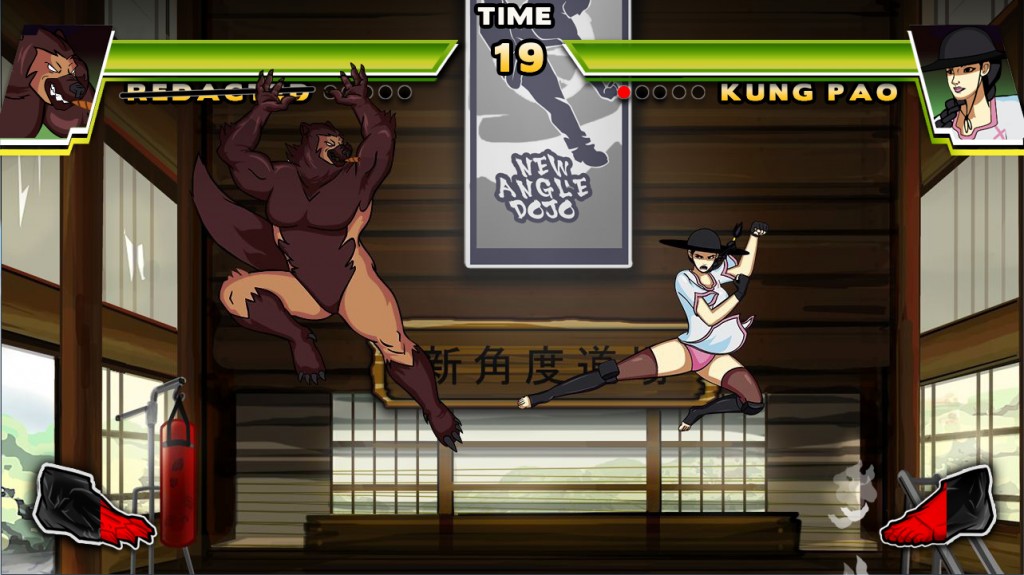 In the game, you can only do two things: jump and attack (or “dive” and “kick,” if you follow the game’s nomenclature). There’s no way to block, and every hit is a one-hit-KO. Each round has a time limit of twenty seconds. The first person to five KOs wins.

With this in mind, I imagined Divekick would be one of those gimmicky fighting games, one of the ones you play with your friends as an excuse to get drunk on a Wednesday. In some respects, it is just that (I am obligated to say that if you do this, drink responsibly: rounds typically only last three or four seconds). Though, in others, it has set a new high bar for innovative game design.

Given that the game only has two usable buttons—and the DualShock 3 has an available, what, forty-six?—you’re able to customize which buttons you use for “dive” and for “kick.” I went with the default schematic (L1 and R1, respectively) and dove in.

As of now, I’ve yet to play the campaign. I likely won’t, either, because come on—who plays fighting games for the story? Regardless, I’ve been getting a real kick out of the multiplayer. What starts out infuriating and confusing—shocking, even, in its novelty—quickly becomes natural and delightful.

At first, not having control over your character feels stifling. But, after a few rounds, you’ll realize the control you’re lacking is purely locational. You’ll develop an understanding of the dive-vs-kick balance and be able to hop around the stage with grace and deadly finesse. Of course, whomever you’re playing with will too, and then it becomes an uproarious, addictive competition.

Similar to the Naruto Shippuden: Ultimate Ninja series, Divekick’s gameplay centers around strategic planning, rather than button-mashing or combo memorization. Less is more; dodging over striking; anticipating instead of participating—those sorts of things. Divekick is truly minimalistic, and it ends up being a surprisingly intuitive exploration into innovative game design.

The only thing that holds the game back is, perhaps, this minimalistic approach. From my count—which could be off because, again, I haven’t played the story—there are less than a dozen characters. While each one is specially designed with different diving and kicking abilities, and each one is hilarious in its absurd design, there really aren’t enough characters. It’s the only place that Divekick feels lacking, in any way.

Destiny
In other news, if you’re looking for the complete opposite of minimalist, check out the latest Destiny trailer. What’s Destiny, you ask? Wow. Man, you work too much.

Destiny is the upcoming game from Bungie—you know, the creators of Halo. With Halo, Bungie changed the way we play first-person shooters. With Destiny, it seems like they’re going to change the way we play video games.

Sprawling and gigantic, this title is, like Halo before it, a futuristic science-fiction saga. However, you can create your own character, pick your own guns—as opposed to those laying on the ground, a la Halo—and travel where you want. There’s seamless multiplayer, but you can still be alone, if you wish. There are powers, there are snazzy vehicles, there are guys with four freakin’ arms!

“This game has an activity for every mood,” says Lars Bakken, a design lead, in the video above. And, with all of the different features and unmitigated thoughtfulness going into Destiny, it sure seems like that’s a viable outcome. Guess we’ll just have to wait. Point is, whether it’s a big game or a small one, now is a great time to be a gamer.

Or, at the very least, a great time to invest in titles that start with “D.”