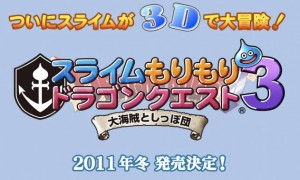 So much good news for me today. A sequel to Dragon Quest Heroes: Rocket Slime (DS) has been announced by Square Enix for the 3DS. (Check out our review of Rocket Slime). Rocket Slime was technically the second game in the spinoff series called Slime Mori Mori Dragon Quest. The newest installment will be called Slime Mori Mori Dragon Quest 3: Daikaizoku to Shippodan. The overall game play mechanics do not seem to be changed. However, this time you will be heading out to sea. You will build your own ships, and engage in ship-to-ship battles.

There will be a single player campaign as well as a two to four multiplayer mode, 3D support, and compatibility with Wi-Fi and Street Pass.  The release date right now is set as Winter 2011.  No word on if this will come to the rest of the world but I hope it does.  I absolutely loved Rocket Slime.