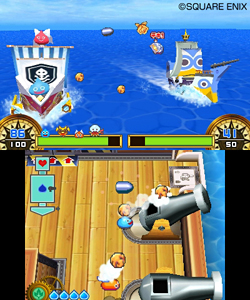 The sequel to Dragon Quest Heroes: Rocket Slime (DS) that was announced by Square Enix for the 3DS back in March has finally gotten a release date for Japan at least.   Technically Slime Mori Mori Dragon Quest 3: Daikaizoku to Shippodan (the official name so far) is the third in the series and will release on November 2, 2011.

The overall game play mechanics do not seem to be changed. However, this time you will be heading out to sea. You will build your own ships, and engage in ship-to-ship battles. There will be a single player campaign as well as a two to four multiplayer mode, 3D support, and compatibility with Wi-Fi and Street Pass.

I absolutely loved Dragon Quest Heroes: Rocket Slime (see my review here). I want this game to get a North American release.