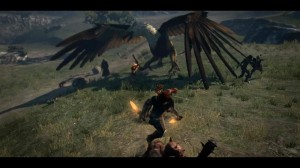 Capcom’s foray into the open-world RPG realm will be available to sample on April 24 when a demo for Dragon’s Dogma hits Xbox LIVE Marketplace and the PSN.

The demo will feature two separate missions that showcase two of the game’s different character classes. One encounter casts players as the melee-heavy Fighter as he or she navigates underground tunnels en route to a duel with a Chimerain, while the other gives players control of the Strider, a more nimble rouge-like character who will use bows and daggers to take down a Griffin.

Players can also fully customize their main “Pawn” (characters are for some reason called Pawns) and export those into the full version of Dragon’s Dogma should they purchase it when it releases on May 22.

And considering Dragon’s Dogma comes packaged with a demo of Resident Evil 6, I have a feeling this RPG might move a few copies.