At this year’s Electronic Entertainment Expo, the press conferences for Sony and Microsoft were grand spectacles as each company tried to sell its new console to the public. However, the journalists who attended the Nintendo press conference were greeted with a much different atmosphere, most likely because they were sitting in an empty conference hall. Having already launched the Wii U last year, and not wanting to compete with the Playstation 4 and Xbox One hype machines, Nintendo chose to instead unveil their newest products through one of their monthly Nintendo Direct videos. In order to drum up excitement this year, they decided to leave the Los Angeles Convention Center and reach out to the rest of the country. To do so, Nintendo partnered up with Best Buy to allow the general public to play demo versions of several recently announced Wii U titles at select locations. An unusual strategy, to be sure, but does it pay off? Well, seeing as how one of the demo stations was hosted nearby, several members of The G.A.M.E.S. Blog staff decided to head over and try them out.

When I arrived at Best Buy, I found that a large crowd had already formed around the demo area. While I was a little worried about there only being a single demo station, the Best Buy employee managing the station, along with our local Nintendo Representative, did a great job at managing the crowd. There were four Wii U games being demoed at the station: Mario Kart 8, Donkey Kong Country: Tropical Freeze, Super Mario 3D World, and The Legend of Zelda: The Wind Waker HD. Over the course of the afternoon, I got a chance to get my hands on all of the titles except for The Wind Waker, and I watched many other play sessions of all of the games.

By far the most requested demo of the event was for the latest installment in the Mario Kart franchise. The two-player demo consisted of a grand prix over three courses. The demo did not provide the course names, so for your benefit I will attempt to describe each of them. The first level looks like it could be the Mario Circuit of the game, and featured rolling green hills and piranha plants that lunged at players. The second stage took place in a city environment that reminded me of a cross between New York and  San Francisco, with narrow streets, a steep hill overlooking the Peach of Liberty, and trolley cars for players to smash into. The final course took place in Boo’s Mansion, which showed twisting hallways straight out of Ocarina of Time’s Forest Temple. Each stage had its own secrets and shortcuts to find, and gave players the chance to experiment with the gliding and swimming mechanics brought over from Mario Kart 7. The motion controls, similar to Mario Kart Wii, were a bit hard for me to grasp,and seemed too floaty for a game that demands as much precision as Mario Kart. It should be noted; however, that this might just be my bitterness from getting beaten talking. With creative, detailed environments, Mario Kart 8 is a gorgeous game, especially since it runs at a smooth 60 frames per second. I must say that the new hovercraft sections made me wish we had a new F-Zero game coming, but for now, Mario Kart 8 looks like a great substitute, one that I’m definitely looking forward to getting my hands on.

One of the surprise announcements at the E3 Nintendo Direct was that Retro Studios’ latest project was a sequel to excellent Donkey Kong Country Returns for the Wii. Several levels were on display during the event, but it seemed like most of the attendees gravitated toward the first level, which was more platforming-oriented and showcased some of the new features such as the 3D camera angles. The controls seemed to be the same as for Returns, and the game seemed every bit as tight as its predecessor. As for myself, I played though the available mine cart level with a partner, which proved to be a worthy successor to the insane and over-the-top sequences from the first game.  Dodging flaming debris and jumping over enemies and bottomless pits was a great challenge, and it actually took us several deaths to make it to the end of the stage. A lengthy boss battle showcased in the demo seemed equally challenging, with players facing off against a viking seal. The stages shown all looked amazing, with backgrounds that showed off a ton of interesting details. Overall, this has me confident that I will enjoy Tropical Freeze just as much as I enjoyed Returns.

The newest 3D Mario platformer seems to be a continuation of the staples set by Super Mario 3D Land for the 3DS, with levels being shorter, bite sized chunks, rather than the larger worlds of Mario 64 or Galaxy. Allowing up to four people to play at once, 3D World also takes a bit of inspiration from the New Super Mario Bros. franchise, allowing players who fall behind or get into trouble to turn into a bubble that floats over to the rest of the crowd. Anyone who has played Super Mario Bros. 2 will be familiar with the character lineup, as well; Mario, Luigi, Peach, and Toad each have their own special abilities, such as hovering or running faster. Something new to the table is the Bell power-up, which puts players in a cat suit and allows them to run up walls and dive bomb enemies. There were several levels, and a boss fight, on display at the demo event. The level we played appeared to be from early in the game and was fairly short. However, it was still a ton of fun to explore the nooks and crannies of the level with a group of people, and we even stopped for a while to attempt a four-player bounce jump, which proved harder than we expected. Still, 3D World looks to be a lot of fun, and the four player co-op has me excited to play more when the game releases later this year.

The Legend of Zelda: The Wind Waker HD

The demo for the Wind Waker was the only game showcased that was single-player only, and gave players the options to either run around Outset Island toward the beginning of the game or fight the Helmaroc King boss. Seeing as how I’ve played through Wind Waker at least three times, I decided not to play this demo myself, but I did watch other people play both sections. The controls seem pretty much identical to the Gamecube version, albeit with different button placements. One change that was shown was with the sailing, as the previously announced fast mode was available in the demo. While the players were kept close to the island, it was still easy to tell the difference between normal and faster speed, which should greatly alleviate some of the tedium from the later half of the game. Other than that, the main thing on display here was the presentation, and boy did it deliver. The original Wind Waker is a beautiful game, and one that has held up well over the years, thanks to the cel-shaded graphics. This remake, however, is even more impressive; the lighting and textures are greatly improved, and seeing the whole game in crystal clear HD is just amazing.

Overall, I must say that the whole event was a lot of fun. The games themselves all look and play amazing, and I can’t wait until I can finally get my greedy hands on them later this year. Just as exciting as the games themselves, though, was the opportunity to share these new experiences with other local gamers. While waiting for their turn to play, people were exchanging Streetpasses, chatting about their favorite E3 announcements, and cheering on the people who were playing. It really seems to perfectly encapsulate Nintendo’s commitment to fun, local, community experiences. In my opinion, it really gave a more personal E3 experience for their fans, and that is something that I think will help them in the long run. I had a blast, and hope that Nintendo is willing to do such public demos more often, or at least at next year’s E3. And, from what I saw, it wasn’t just me; it seemed like every person who tried the Wii U demos couldn’t help but smile. If that’s not an endorsement, I don’t know what is. 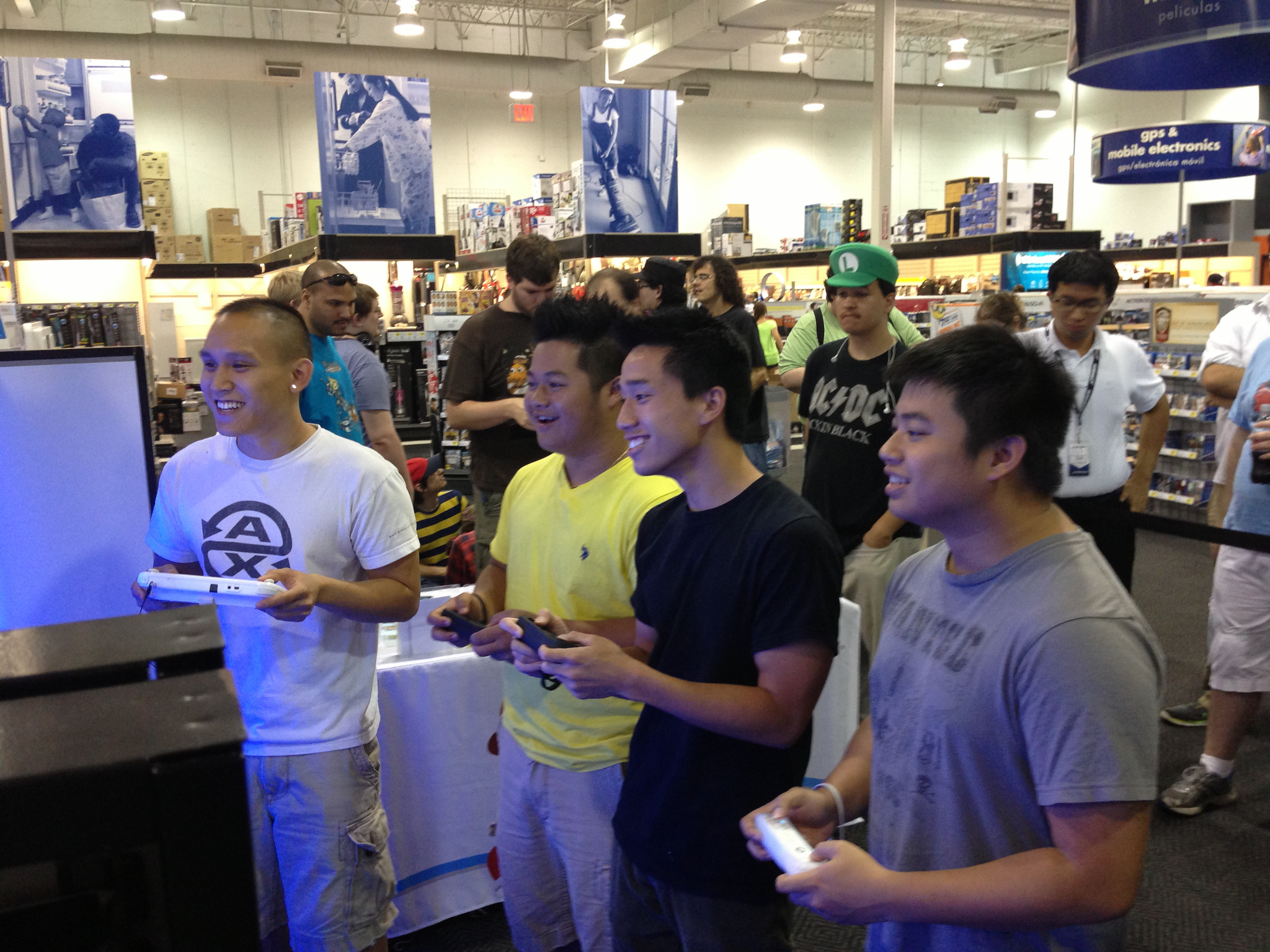