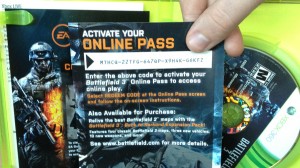 When it comes to internet hatred, no company receives more flak than Electronic Arts. The entertainment conglomerate has received Consumerist’s “Golden Poo” award for the last two years, and it’s business practices, from intrusive DRM to acquiring studios and quickly closing them,  haven’t gone over well with gamers. Maybe that’s why it’s so surprising that EA has decided to stop including online passes in their games.

For the uninitiated, online passes are one-time use codes that are packaged with all new copies of a game. Once activated, they usually unlock a key component of the game, including co-op, multiplayer, or some form of downloadable content. Those who buy a used copy of a game will have to purchase an online pass from EA themselves, thereby generating some revenue (remember, used game sales don’t benefit publishers). While EA has used online passes for the last three years, they have now announced that future titles will no longer require them.

Speaking to VentureBeat, senior director of corporate communications John Reseburg confirmed that ““none of our new EA titles will include that feature.” While this won’t retroactively apply to old titles (if you still want to wreak havoc in Battlefield 3, you’ll need an online pass), you won’t have to worry about buying used games or sharing games with your friends anymore.