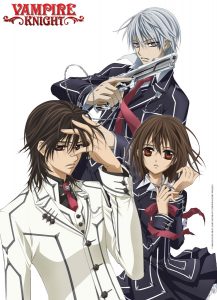 San Francisco, CA, March 25, 2010 – VIZ Media, LLC (VIZ Media), one of the entertainment industry’s most innovative and comprehensive publishing, animation and licensing companies, has announced the cast for the upcoming North American debut of VAMPIRE KNIGHT, the gothic-romance animated series based on the bestselling manga (graphic novel) by Matsuri Hino.

VIZ Media sought out a cast of talented voice actors and the recording expertise of Bang Zoom! Entertainment to bring this series to life. Yuki Cross, the adoptive daughter of the headmaster of Cross Academy, is played by Mela Lee. Veteran anime voice actor Vic Mignogna plays Zero Kiryu, a student who is a year older than Yuki Cross and comes from a family of vampire hunters. Finally, Kaname Kuran is portrayed by Ethan Murray. In the series, Kuran is a pure blooded vampire and the current Head of the Kuran Clan. He once saved Yuki from an attack by another vampire when she was seven years old and also serves as the president of the Night Class and the dorm leader. Kuran is both feared and respected by the other Night Class students.
VAMPIRE KNIGHT is an important series that demanded skilled actors who could portray these complex characters without sacrificing any of the intensity and emotional drama each one exudes,” says William Germain, Director, Programming & Music Sales, VIZ Media. “We also know there are a lot of fans of the manga that have been waiting for this series so we wanted to bring in some very talented people who we know will take VAMPIRE KNIGHT to a whole new level. Look for more news coming soon about the North American debut!”

VAMPIRE KNIGHT (rated ‘T+’ for Older Teens) is based on the best selling manga series created by Matsuri Hino, who burst onto the manga scene with her debut title, When This Dream Is Over, in LaLa DX magazine. With the success of subsequent series such as CAPTIVE HEARTS and MERU PURI (both published domestically by VIZ Media), Hino has established herself as a major force in the world of shojo manga. VAMPIRE KNIGHT is currently serialized in LaLa magazine. On January 17, 2010, the latest volume of VAMPIRE KNIGHT, Volume 9 ranked Number 1 on the New York Times Manga Bestseller list.  Currently VAMPIRE KNIGHT has two volumes in the top ten.

Ethan Murray has been a voiceover performer since 1994.  Mr. Murray was spotted in a stage production and was asked to voice monsters in Saban’s Mighty Morphin Power Rangers and has been thriving in the world of voiceover ever since.  Over the past sixteen years Mr. Murray has been involved in hundreds of projects.  Most notably: Arc the Lad, Gankutsuou, Blade the Immortal, Tenjo Tenge, and Rurouni Kenshin.

Mela Lee has brought life to over 20 characters in the past seven years (Fate Stay Night, Rozen Maiden, When They Cry, and Blade of the Immortal). Lee’s fans have come to expect heartfelt performances hallmarked by depth and dimension. With the much-anticipated release of VAMPIRE KNIGHT, Lee adds Yuki Cross to her cache of classic characters.

Vic has been acting for stage and screen since he was 8 years old. But he started his career in anime about ten years ago as Vega in Streetfighter II. Since then Vic has been in more than a hundred and fifty shows and video games, known for such roles as Edward Elric in Fullmetal Alchemist, Tamaki Suou in Ouran High School Host Club, Fai in Tsubasa Chronicle, Dark in DN Angel, Kurz in Full Metal Panic, Broly in Dragonball Z, Kougaijji in Saiyuki, Ikkaku in BLEACH, Yukito in Air, Takanaga in Wallflower, Tatsu in Peacemaker, Luciano in Code Geass, Virgil Walsh in Trinity Blood, Hikaru in Macross, and many more. He is currently back in the role of Edward in Fullmetal Alchemist Brotherhood, playing Death Scythe in Soul Eater, as well as characters in NARUTO and several others. Vic has also voiced roles in a large number of video games including Soul Calibur, Disgaea, Persona III, Project Sylpheed, DBZ, Bleach, FMA, and more. But even longer than his voice acting, Vic has been a professional music composer / singer / producer who has written and produced hundreds of songs for TV, radio and CD. He sings the themes for shows like One Piece & DBGT, and has produced several CDs of his own original music. And finally, in addition to anime and music, Vic has a degree in film and works regularly writing, producing and directing video and film productions. Vic has voiced characters in more than 100 anime series and video games.

Situated in the heart of Burbank, California, Bang Zoom! Entertainment, Inc. is a leading and award winning full service audio post production studio working in the fields of feature films, television, video games, and anime. Founded in 1993, Bang Zoom! Entertainment is committed to delivering the most comprehensive level of audio and creative production expertise imaginable, along with developing a range of independent projects that contribute to the promotion of innovative cultural awareness internationally. More information about Bang Zoom! Entertainment and its services can be found at www.bangzoomentertainment.com.

Headquartered in San Francisco, CA, VIZ Media, LLC (VIZ Media), is one of the most comprehensive and innovative companies in the field of manga (graphic novel) publishing, animation and entertainment licensing of Japanese content. Owned by three of Japan’s largest creators and licensors of manga and animation, Shueisha Inc., Shogakukan Inc., and Shogakukan-Shueisha Productions, Co., Ltd., VIZ Media is a leader in the publishing and distribution of Japanese manga for English speaking audiences in North America, the United Kingdom, Ireland, and South Africa and is a global ex-Asia licensor of Japanese manga and animation. The company offers an integrated product line including the popular monthly manga anthology SHONEN JUMP magazine, graphic novels, and DVDs, and develops, markets, licenses, and distributes animated entertainment for audiences and consumers of all ages. Contact VIZ Media at 295 Bay Street, San Francisco, CA 94133; Phone (415) 546-7073; Fax (415) 546-7086; and website at www.VIZ.com.