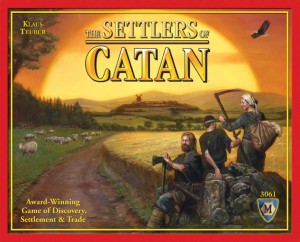 If you’re like me, you enjoy playing Settlers of Catan, but all your friends hate it. So, you never get the chance to play it. Big Huge Games solved this problem for 360 owners a few years ago with their XBLA release of Settlers of Catan, but not according to the ESRB, there will soon be a version available on the PlayStation Network, as well. The ESRB notice lists the Game Republic version that was released in Japan in 2008 as the one that is being brought to PSN.

Klaus Teuber’s Catan series has spawned many spinoffs and expansions over the years, but doesn’t have the mainstream following of games like Clue or Monopoly. Usually, your best bet to find it is either on the internet or a local comic shop, but digital distribution gives you a cheaper, more readily accessible alternative. Now if we could just get electronic versions of Arkham Horror

, I’d be set. No word yet on when the PSN version of Settlers of Catan will be released or how much it will officially cost, but we’ll keep our ears to the ground.