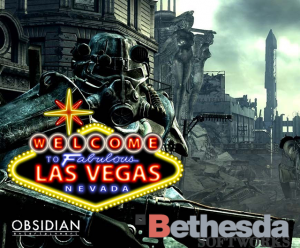 Looks like PC gamer jumped the gun a bit and sent out some early copies of next months mag which included the anticipated Fallout: New Vegas preview. So what can you expect from New Vegas? Well the guys at Duck and Cover have been collecting the info from various threads on the Bethesda message boards.

* There is an optional hardcore mode, the character needs to drink water, ammo has weight, healing isn’t instant etc. Normal mode is more similar to Fallout 3 gameplay.
* The storyline is focused on the New California Republic vs. Caesar’s Legion vs. New Vegas residents.
* You are not a vault dweller but are given a Pip-Boy by someone who is one.
* There is a screenshot of a vault suit as well.
* There is an assault rifle looking like the M4, as well as a new big gun with a backpack, held like a minigun.
* There are special moves for melee weapons in VATS – specifically a move for a golf club called “Fore” which seems to be a groin shot.
* The Hoover Dam is in the game and is supplying electricity to the city.
* There is a quest to rescue a ghoul from some super mutants. The ghoul can then become your companion
* The Geckos are back.
* There are both dumb and intelligent super mutants, including the elite Nightkin.
* Some super mutants look similar to the ones in Fallout 3, while others are new. There is e.g. a female super mutant with a 1950s hairstyle who apparently is one of their leaders.
* Screenshots include a guy with a beard and straw hat, a ghoul an NCR Ranger
* The only picture of New Vegas itself is concept art and not a screenshot
* Some location screenshots include a huge model dinosaur advertising a hotel, some satellite dishes, an array of solar panels
* A character generation shot showing a “vigour machine” instead of the skill book
* NCR base is the McCarran Airport, Caesar’s Legion is based in the Vegas Strip, while super mutants are based in a place called Black Mountain. There is also a town called Fremont and another called Primm. A topless reuve is mentioned as being in the latter. Area 51 also appears.
* NCR Ranger armor is similar to a brown combat armor with sleeves, there are concept arts of a Ranger
* Skils have a bigger effect on conversation choices. E.g. someone with a high Explosives skill may be able to have a conversation about explosives where appropriate.
* There is a Reputation system in adition to Karma.

– First-person action RPG with the same engine as Fallout 3 (sorry, Van Buren fans).
– Set in the Mojave wastelands. Vegas didn’t get many nukes. More intact buildings, as well as desert vegetation. Vegas itself is mostly intact.
– You don’t play a Vault Dweller (or descendant of one) but a courier, left for dead and saved by a friendly robot.
– The overarching story is a struggle between the locals, Caesar’s Legion (a faction of slavers from the east) and the New Californian Republic. Vegas itself is mostly intact.
– Both karma and reputation are tracked. If I’m reading it right there’s separate reputations for each of the settlements, as in 1 and 2.
– All dialogue options are shown to all players, regardless of whether you have the stats to succeed or not, though there’s no punishment for failure.
– Bartering is not just lower prices but negotiating for better rewards.
– VATS returns, and melee weapons have special moves in it. The golf club has “Fore!”, which is a shot to the golf balls (so to speak) that knocks the opponent down. Weapons also now have knock-back upon death, with shotguns sending mans flying.
– Super Mutants return, but in two varieties – the smarter ones from Fallout 1, and the idiot ones from Fallout 2. On at least one occasion you can convince them to fight amongst themselves.
– New weapons include what appears to be an M4 and a grenade machinegun.
– Followers can be managed through a context-sensitive menu, with orders like “follow”, “stay” or “attack”.
– Hardcore Mode! In this mode, Stimpacks heal over time (as opposed to instantly), combat is tougher, ammo has weight and you can suffer dehydration, so keep some water on you!

One of the screenshots has a Super Mutant with a blonde wig and pink heart-shaped glasses.

You’re a courier, wounded and left for dead in a shallow grave. A friendly robot, Victor, digs you out, and his doctor owner Mitchell patches you up. You take a “vigour test”, which is some sort of electric parlour game. This decides who you are and sets up SPECIAL. You can also take some Rorschach tests, but the mag says this is for fun. The Doc then gives you a Pipboy as he was once a Vault dweller.

“Hoover Dam”, and “Helios” (a solar plant, confirmed by the mag to have been built by Poseidon) are fought into and then you can direct the power to wherever you choose. In the case of Helios you can also keep the plant for your self use the energy to call down a powerful laser, or even try to distribute to all equally, however there is a risk of overloading the reactors.

There is a “reputation system”, in which all three factions (NCR, Ceasar’s Legion and the locals) will either see you as good or bad toward them individually.

There is a screenshot of three Capital Wasteland mutants running toward the player, who is wielding what *looks* to be a heavy incinerator, but has a TV screen and no flamer fuel tanks. He’s also wearing NCR combat armour, which is in gold/mustard colours.

There are two separate screens of supermutants that look to be more local, grey skin, and the two are wearing very different clothes. One is Tabitha, who is hearing a blonde wig and love heart glasses. The mag implies she’s “not all there”.

One that quest, you rescue Raul, a ghoul who Tabitha kept alive to fix her favourite robot. He appears to be a follower, as the mag says you can give him items, and also commands, such as “stay, follow or attack”, and also tell him to switch to melee, in which case he’ll mutter “sure, I’ll put away my rather effective gun, and switch to this piece of um, metal tubing here”.

From what I read, the “all dialog” thing seems to imply there will be failures for skill checks as well as speech checks, though, as the mag states, there is no penalty for failing a skill check. In fact, the mag gives an example: A woman who the player tried a Sneak skill attempt on in conversation failed when convincing her an ambush would help the town be rid of a gang of raiders. She simply says “”Good luck with your, uh, ambush”

I also do want to clarify what is meant by “no penalty for failure”. All it means is that you won’t wind up in a worse position than you were before selecting it. If a dude bursts in and is intent on killing you, he’s still going to want to kill you if you fail the Speech check to talk him out of it.

Sounds like Bethesda is keeping up with its history of great game making. Can’t wait to get a hold of this game.