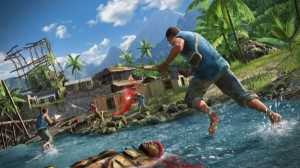 The jungle is a dangerous place. Seriously, between the giant spiders and snakes that hang from branches above you, you’d think that a small army of men armed with guns would be the least of your worries. But that’s not the case, especially in the upcoming multiplayer beta for Far Cry 3.

Front Towards Gamer reports that the beta will open this summer, will support 16-player matches with 6 playable classes, dozens of weapons, and a vast array of customization options. To spice up the gunplay, matches will also contain zip-lines, combat sliding, and psyche gas.

Players can also set the jungle on fire (digitally, of course–please don’t start any actual jungle fires) in the playable Firestorm mode. In this smoldering game type, two teams defend their respective supply depots while trying to set their opponents’ depot ablaze, which will then dynamically propagate across the battlefield and cut off certain areas.

While this will be a closed beta, there are multiple ways to earn access:

Ubisoft has yet to give a specific date, but the beta will run on Xbox 360 and PS3 this summer. Stay tuned for more details as we get them.