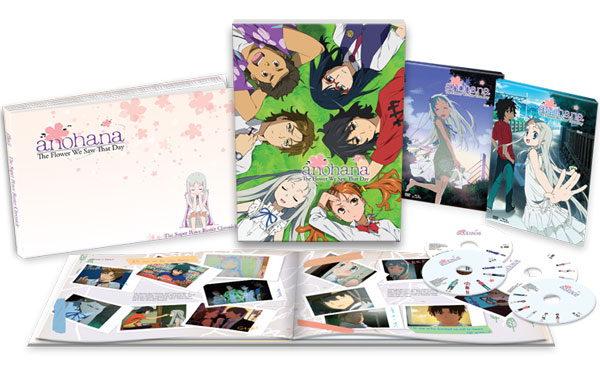 anohana: The Flower We Saw That Day follows a group of estranged friends who grew apart after an accident that changed their lives forever. Now in high school, these teens must come together once more to help their childhood friend Menma, who recently came back into their lives. She needs a wish granted, and the “Super Peace Busters” attempt to set aside their own problems to make it happen. However, this also forces them to confront their guilt over the accident and face the negative feelings that have kept them apart for so long. This story makes anohana a bittersweet series that will tug at your heart, but it is also a high-quality anime that deserves your attention.

This series is only eleven episodes long, but don’t let its short length deceive you. anohana packs plenty of story, solid character development, and a heavy dose of emotion into each episode. The bulk of the show stays in the present, but it delves into the characters’ backgrounds through well-executed flashbacks that never feel gratuitous or forced. The writers wasted no time in getting to the point about what each character is hiding, but they also didn’t choose to dump all of the kids’ emotional baggage onto the audience at once. Each character’s story unfolds at a steady pace over the course of the series, and you’ll find yourself experiencing their powerful reactions to what’s going on right along with them. It’s easy to care about Jintan, Anaru, Menma, Poppo, Tsuruko, and Yukiatsu because they feel so real. 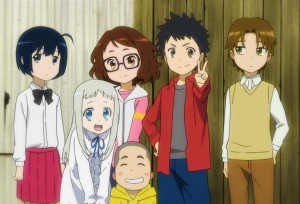 Though the character development is spot on, the otherwise tightly-knit plot suffers slightly from predictability. You’ll probably see certain twists coming from miles away, even though they are clearly supposed to take the viewer by surprise. Also, some points of information that I felt deserved answers were left up to the audience’s imagination. Ultimately, however, all of the major plot threads were resolved by the end of the last episode.

You won’t find a lot of background music in anohana beyond the occasional bit of piano, but the opening and closing themes fit the series perfectly. They are both slow melodies that evoke imagery of summers past and cherished memories. The only downside to these beautiful pieces of music is that they are also rather sad. This makes sense because no matter how you look at it, anohana is a sad story. As the series goes on, if you don’t want to skip the songs, I’d recommend speeding them up a bit if they make you feel gloomy. Both hold up well and become more bouncy to listen to at 1.5x speed, as long as you don’t watch the subtitles.

anohana‘s voice work is also excellent. The characters’ feelings always came through clearly in the acting, and everyone’s voices really matched up well with their characters. If you tend to watch your anime subbed rather than dubbed, you might recognize some of the cast from series like D.N.Angel, Guilty Crown, Katanagatari, Code Geass, Eden of the East, or Shakugan no Shana. As with all NIS America releases, this one only comes subbed, so you won’t see any of your favorite English voice actors here.

For the most part, the art in this series is good as well. The characters are highly expressive, and it’s easy to see that their older versions still retain traits from their younger selves. Though any unimportant characters sort of fade into the background, the six friends and any side characters that help drive the plot are each unique. I do wish there had been more attention given to the world those characters live in, though. The wooded area around the kids’ secret base was pretty, but beyond that, the setting was unremarkable. However, the biggest gripe I had with the art involved characters that wear glasses. For some reason, the artists decided to leave out a section of anyone’s glasses whenever you were viewing their face from the side. This showed the characters’ eyes more clearly, but it was jarring and took me out of the moment every time it happened. 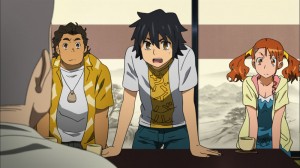 The premium edition of anohana: The Flower We Saw That Day comes packaged in a special box showing all of the characters on the outside. It includes a Blu-ray/DVD combo pack for each half of the series as well as a hardcover collector’s book called “The Super Peace Buster Chronicle.” The collector’s book is great if you’ve already seen the series: it contains episode descriptions, extra artwork, character bios, and even a section that shows off all of Jintan’s different shirts. Of course, all of these things are spoilerific, so if you purchase this edition, don’t read the book until you’ve finished the show.

I can’t remember the last time I had the kind of emotional response to an anime that this series produced. If you’re looking for a show that will give you warm fuzzies, make you laugh, and break your heart all at the same time, anohana: The Flower We Saw That Day will be right up your alley. However, I won’t sugarcoat this for you: you will come to care about these characters so much that, unless your heart is a block of ice, you will cry. Just writing this review is making me teary-eyed, and I managed to stave off the water works until the very end of the series. If you’re quick to cry over sad stories, consider this your warning: anohana is a wonderful series, but keep a box of tissues handy at all times when watching it.

Disclosure: This series was screened using a review copy sent from NIS America.