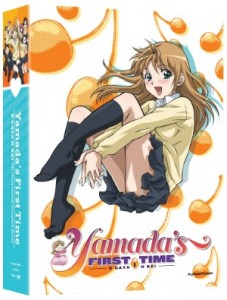 I’ll be honest, I’m not what you would call an ‘anime buff’. In previous years, I thought all anime consisted of androgynous warriors battling each other over pointless reasons, or in some cases, dragon balls. Turns out, anime is a lot like video games, in the sense that there are various genres, from comedy and action, to slice-of-life and mecha. B Gata H Kei: Yamada’s First Time is an ecchi anime, and at first glance, you can explain it to someone by comparing it with American Pie. Turns out, if you dig a little deeper, you’ll find that it is essentially a gender swapped version of the aformentioned classic teen movie. The question is: is it as good (or for some, as bad)?

B Gata H Kei follows the story of Yamada, a highschool student whose ultimate goal is to have sex with 100 different schoolboys. The only problem is, Yamada is still a virgin, and she is having trouble when it comes to ‘taking the plunge’. Enter Kosuda, a shy, average teenager who runs into Yamada at a bookstore. After learning that they attend the same school and that Kosuda is a “cherry boy,” Yamada decides that she will seduce and have sex with him, in order to finally begin her journey to sleep with 100 different partners. This provides the framework for the series’ plot, and this is where the story falters most. Many of the episodes focus on Yamada  attempting  to seduce Kosuda, but this tends to end in failure, as she either comes on too strong (by flashing her breasts for example), or by getting scared and leaving in a panic (in one episode, Yamada is freaked out by Kosuda’s ‘bulge’). While this plot structure could have worked, it ends up falling flat when each episode ends on the same note. For a majority of the series, the plot never really advances; instead, new characters are introduced in an attempt to thwart Yamada’s and Kosuda’s relationship.

Over the course of the series, Yamada beings to realize that she has developed feelings for Kosuda. However, she only realizes this when it’s pointed out by her best friend, Takeshita. Since Yamada is inexperienced in the world of dating, Takeshita is always trying to offer her friendly advice. Yamada constantly barrages her with questions that are related to sex, which only serves to make Takeshita feel more awkward. These situations are often humorous, though they can sometimes be more awkward than funny. For example, Yamada sometimes asks Takeshita about her sex life, or points out that Takeshita has ‘F-cup sized’ breasts. Yamada also receives help from her ‘Eros Deity’, which is simply a chibi version of herself. Her Eros Deity ends up being one of the funnier characters, since most of her dialogue comes in the form of small quips and jibes at Yamada’s lack of tact.

Throughout the series, there are a couple of characters who come in between Kosuda and Yamada, though only one of them has any malicious intentions. Miyano is a childhood friend of Kosuda, and has harbored a crush on him since childhood, though she is too shy to reveal any of her feelings. She is your typical meganekko, but Yamada is jealous of her cooking abilities, and the fact that she is an F-cup. However, Yamada’s jealousy is misunderstood by Miyano, and she thinks that Yamada is one of her best friends. The other (and much more evil) character is Kanejo, a very wealthy student who has returned from studying abroad in America. After Yamada bests her in a school-wide beauty contest, Kanejo takes it upon herself to ruin Yamada’s relationship with Kosuda. Unfortunately, Kanejo’s brother ends up falling for Yamada, which only angers Kanejo further, since she has a crush on him.

There are a few minor characters who make recurring appearances, but they are relegated to providing comic relief as opposed to providing any significant plot development. Yamada’s little sister often belittles Yamada over the fact that she can’t hook up with anyone, while Kosuda’s older sister constantly teases him and Yamada over their stale relationship. Takeshita’s boyfriend was actually my favorite minor character since he was the most grounded of the bunch, but he only made a few appearances.  It’s unfortunate that many of the side characters never got their spotlight, especially since they are interesting in their own right. While it doesn’t ruin the series, you will grow tired of hearing Yamada over and over.

Speaking of which, the voice work is fairly well done itself, both  in English and Japanese. While the English dub can be a bit simplified at times, it captures the spirit of the original dialogue quite well. The music is also pretty good; but here it’s a matter of quality over quantity, since there aren’t too many unique tracks. There isn’t too much music during the episodes, but the song that plays over the opening credits is dangerously infectious.  One minor complaint is that there is no specific subtitle track for the English dub, meaning that the subtitle track for both Japanese and English are the same. The meaning between the two are the same, but different words are used throughout. It doesn’t ruin the experience, but you will find yourself confused when the English audio and subtitles don’t match up.  The visuals are nice, albeit a little simple. In typical ecchi fashion, there is no “real” nudity per say (except for one episode, where bare breasts are shown), but the series is still intended for mature audiences.

Overall, B Gata H Kei falls way short of perfection, mainly due to the fact that the plot fails to advance throughout the brief 12 episodes. But amidst all the sexual innuendo and awkwardness is an anime that many can relate to on some level. High school is an awkward place, and although it doesn’t do it justice, B Gata H Kei manages to capture some of the sexual awkwardness that we have all lived through. If you can look past its shortcomings, you might just enjoy the series for what it is. Granted, you could certainly do a lot better, but you could also do a lot worse.

Disclosure: This series was screened using a review copy provided by FUNimation. Also, for a different take on the series, check out a review from one of our resident anime fans, Patrick.